Pichai will overse­e the bigges­t compan­y under that umbrel­la, which will still be called Google­
By AFP
Published: August 11, 2015
Tweet Email 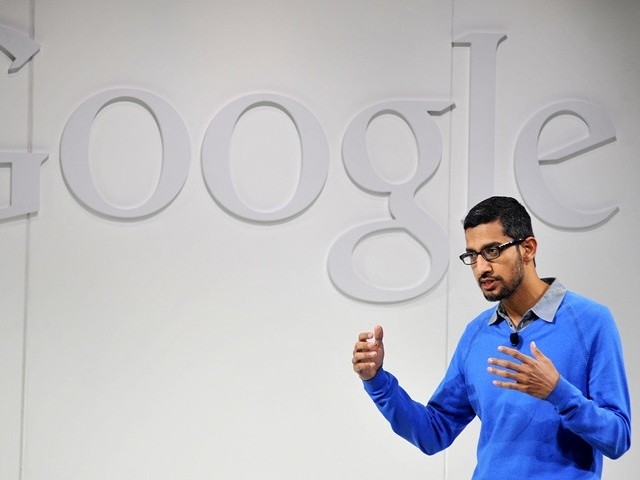 In a surprise announcement, Page said Alphabet will be the umbrella company for the tech giant's research arm X Lab, investment unit Google Ventures and health and science operations, as well as the search unit Google, whose CEO will be current vice president Sundar Pichai. PHOTO: AFP

SAN FRANCISCO: His name may not ring a bell, but Google’s new CEO Sundar Pichai has worked on some of the company’s best-known products — from the Chrome browser to the Android mobile software.

Pichai, 43, was named chief executive officer of the Internet titan on Monday, as Google unveiled a new corporate structure creating an umbrella company dubbed Alphabet. He will oversee the biggest company under that umbrella, which will still be called Google and will continue to include some of its household products, including its search engine, ads, maps, apps, YouTube and the Android system.

Alphabet will be run by Google chief Larry Page, who showered praise upon Pichai, senior vice president of products. “I feel very fortunate to have someone as talented as he is to run the slightly slimmed down Google and this frees up time for me to continue to scale our aspirations,” according to Page in a blog post.

Page said he was impressed with his “progress and dedication to the company” and promised to continue to groom Pichai, who has been at Google since 2004. “I have been spending quite a bit of time with Sundar, helping him and the company in any way I can, and I will of course continue to do that.”

Read: Google throttles back vision for its social network

In his role as SVP of products, Pichai oversees management, engineering and research for Google’s products and platforms, according to Google’s filing at the US Securities and Exchange Commission. Before that, he was SVP of Google Android, Chrome and Apps, working on consumer products “used by millions of people,” the filing said.

Pichai was part of the team that launched the Chrome browser in 2008 and also worked on various search products, including Google Toolbar, Desktop Search, Gadgets and Google Gears, according to the company. US media described him as soft-spoken, little-known, and a long-time right-hand man to mentor Page.

In a 2014 interview with Forbes he said one of his main priorities was the transition to mobile. “Is it an important shift for us? Yes. Are we doing it well? There are many indications that yes we are. When you look at all our core products, they do well in mobile.”

He also talked about expanding Google Play into China, which Google withdrew from in 2010 after a fallout with Beijing over censorship issues. “If we can figure out a model by which we can serve those users, it would be a privilege to do so. So, I don’t think of China as a black hole,” he told the magazine. “I see it as a huge opportunity in which we are playing as an enabling platform today and hopefully we have a chance to offer other services in the future.”

Before joining Google, Pichai worked as an engineer at manufacturer Applied Materials, followed by a stint in management consulting at McKinsey & Company. Originally from Tamil Nadu state in southeast India, Pichai received a Bachelor of Technology from the Indian Institute of Technology Kharagpur. He also has a Master of Science from Stanford University and a Master of Business Administration from the Wharton School of the University of Pennsylvania.

Page said Pichai is the man to steer the Google ship in the coming years, as it continues to innovate and expand its product base. “Google itself is also making all sorts of new products, and I know Sundar will always be focused on innovation-continuing to stretch boundaries,” he said.