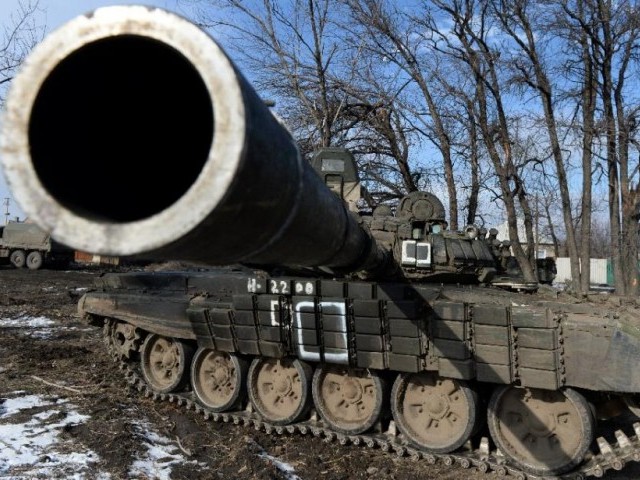 KIEV: Ukraine on Monday said it had repelled a rare tank assault by pro-Russian rebels that threatened to erase a shaky ceasefire and dangerously escalate the 16-month war in its breakaway east.

President Petro Poroshenko said about “200 insurgents used tanks to storm” Novolaspa — a village halfway between the separatists’ de facto capital Donetsk and the Kiev-held port of Mariupol — in a pre-dawn raid that caught government soldiers off guard.

Chief of Staff General Viktor Muzhenko “informed the president that the Ukrainian forces gave a fitting rebuff and repelled all the attacks,” the presidency said.

But the defence ministry later reported the insurgents mounting a second attack on the same village whose outcome was not immediately clear.

“Ignoring the truce agreements, our enemies are continuing to stage provocations that are meant to escalate the conflict,” the defence ministry said in a statement.

The Ukrainian foreign ministry called the clashes “a dangerous indication of a further escalation to come”. But the rebels denied the push and signalled that they had always had militia units stationed in Novolaspa.

“The armed forces of Ukraine simply put the village under a heavy shelling attack,” a local separatist official told the rebels’ main news site. “Novolaspa remains under the control of the People’s Republic of Donetsk.”

Kiev on Monday reported the death of one soldier while the insurgents accused government forces of killing a civilian in the rebel-held bastion of Gorlivka.

The two self-proclaimed republics of Donetsk and Lugansk launched their revolt shortly after the February 2014 ouster of a Moscow-backed president in Kiev and Russia’s subsequent seizure of Ukraine’s Crimea peninsula.

The clashes have killed more than 6,800 people and sent Moscow’s relations with the West crashing to their lowest point since the Cold War.

The fighting has also left 1.4 million homeless and sent Ukraine’s economy — heavily dependent on exports from the industrial east of the country — into a tailspin.

The West is still pinning hope on a February truce agreement that has often been ignored but also kept the fighting limited to a flashpoints in the Russian-speaking east of the former Soviet state.

The latest reported clashes came one day after a special monitoring mission from the Organisation for Security and Co-operation in Europe saw several of its armoured vehicles torched outside its headquarters in Donetsk.

Poroshenko said Monday’s reported tank battles around Novolaspa and Sunday’s attack on the OSCE vehicles were all part of the rebels’ attempt to raise tensions and erase any achievements of the February truce.

But the insurgents accused Kiev of provoking the violence.

“We are on constant alert for a possible new wave of military activities,” rebel chief Alexander Zakharchenko warned on Friday. “We are ready for anything.”

Tensions are rising ahead of the two separatist regions’ plans to stage elections this autumn that Kiev has already condemned as illegal.

A recent rise in the number protests against the OSCE mission has also alarmed European leaders who had hoped to see the final terms of a peace agreement concluded by the end of the year.

Germany Chancellor Angela Merkel and French President Francois Hollande have held two teleconferences with Putin and Poroshenko in the past month aimed at reviving the peace process and tackling what have become increasingly intractable disputes.