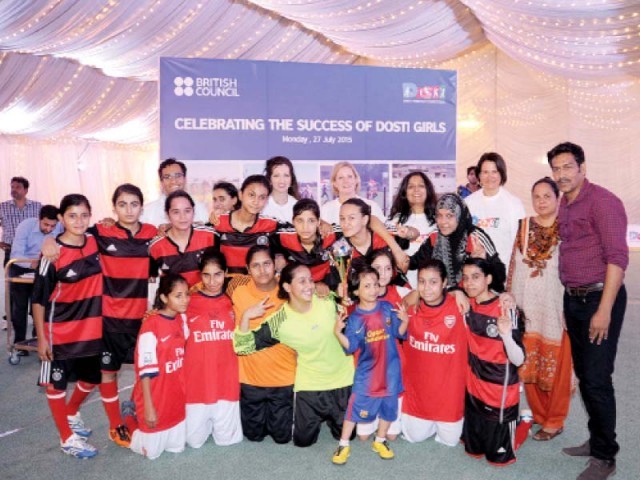 The British Council organised an all girls football match between team Queen from Islamabad and team Dosti from Karachi as part of its “Dosti programme” which focuses on resolving conflict through peaceful development activities such as sports.

British Pakistani Members of Parliament (MP) and heads of the British Council attended the match. The project, which has been held in Karachi for three years, is being implemented in Islamabad for the first time.

“Initially it was challenging to get parents to come on board. But with the involvement of the entire community the teams have really expanded. Over two years, girls are on the national championship and boys are playing internationally. What they are learning is not just about career but a lot of skill development such as team-building, confidence, networking and the ability to speak in front of public,” said Shazia Khawar, director of society South Asia.

Rehman Chishti, a British MP from Gillingham and Rainham said “The work of the British Council is excellent and we are here to bridge gaps between people through sports. Sports is brilliant as it goes across society and is excellent in building bridges.”

When asked what he would say to families who are uncomfortable with their daughters taking part in sports, he said “I’d say a woman is as good as a man and sometimes better. A country where a former prime minister was a woman, why can’t women play sport here? I’d want to see this team play in England.”

Tasmina Ahmed Shiekh, an MP from Scotland, said “I am particularly delighted because women are playing. Sport is a language that should be universally supported. It is great to see the British Council support the excellent work happening over here.”

She further said from a world political perspective, its women’s time to achieve.

Fasi Zaka, a consultant for the British Council, said “Sport is brilliant because it goes across politics. Some of these girls are from tough areas such as Lyari.”

He added sports activities such as these bring positivity and help people going through post traumatic stress disorder.

The ground where the match took place was in high spirits however the score was in the favour of team Queen after they won the match 3-0. At the end both team members shook hands which was followed by an awards ceremony.

At the end of the match, the British MPs were seen playing their own game of football.

“How can you look at this and not feel proud. I love this because what you see here is the best of Pakistan. Some of these people have made it to a football competition in Brazil. This is about young people supporting the future of Pakistan,” said Peter Upton, the country director of British Council.