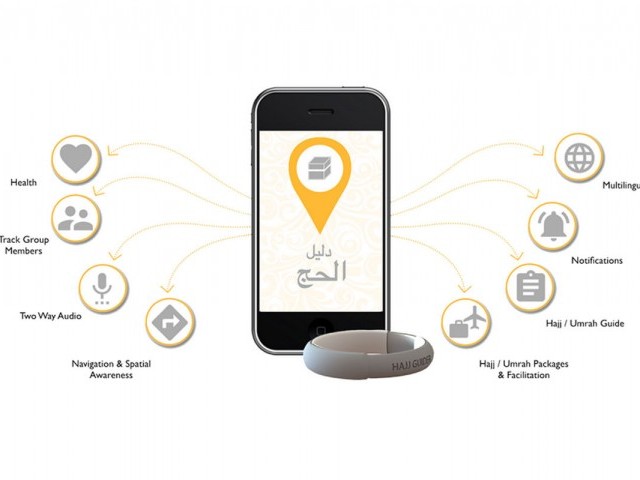 Cost: $100 or below, is the likely price of the wearable tracking device, said Khan.

Every year Muslims from all over the world visit Saudi Arabia to perform Hajj, an obligation on every Muslim who can afford it to perform at least once.

More than 2 million Muslims made the holy journey in 2014, while 150,000 Pakistanis are expected to perform Hajj this year. However, the experience of the most sought-after journey does not come without hardship, in particular, when family members go temporarily missing among the millions around the world.

Keeping track of loved ones is one of the major challenges pilgrims have to face, especially in a place where men and women are segregated.

But a solution is on the cards, at least for Pakistanis – courtesy ‘Hajj Guider’, a wearable tech start-up that is gearing up for a full scale launch before Hajj 2016.

Based at Plan 9 – the technology incubator of Punjab Information Technology Board – Hajj Guider is a wearable tech start-up designed to help people communicate and navigate during Hajj and Umrah.

The product is a wearable device or band, to be worn on the wrist and comes with a supportive smartphone app.

However, wearing the band alone can help pilgrims communicate with each other similar to the function of a walkie-talkie. Additionally, those wearing the band can be tracked by their group leader or family member via a smartphone app.

“The band alone offers tracking and communication but the smartphone app offers extended features,” said one of the co-founders Moeez Qadri. “The device will cover up to a three-kilometre range or more depending upon traffic, “he said.

Brain child of Hasam Ahmed Khan, who started working on the product as a ‘final year project’ while still an undergraduate student at COMSATS Institute of Information Technology Islamabad, the app is already getting some attention.

The Hajj Guider team has already secured $30,000 in seed money from Oasis500, a leading start-up accelerator from the Middle East, accompanied by incubation offer in Jordan.

Moreover, the start-up has recently raised substantial amount from Dubai Silicon Oasis during the second round of funding.

Though Qadri refused to disclose the amount, he said they have completed their initial target and the funding has come along with a promise for office space. “We are currently in the process of moving our office to Dubai,” he said.

“The initial idea was to create a mobile application to help pilgrims track each other and navigate during Hajj and Umrah,” Hajj Guider co-founder and Chief Operating Officer Hasam Ahmed Khan told The Express Tribune in an email.

“Given a mobile application had multiple dependencies such as internet, cellular signals and battery life of the phone, the team decided to move from a software venture to a hardware start up,” informed Khan.

He said the idea was a wearable band that could solve multiple problems ranging from tracking to navigating and communicating without the use of cellular signals or internet.

According to Khan, competition exists but other products work on GSM technology and cost up to $350. “Ours, however, works without mobile signals or internet and is likely to be priced at or below $100,” he added.

He added that basic training on using the band can also be provided during preparatory Hajj camps.

Whether or not the device is well received in the largest mass gathering in the world, the Hajj Guider team seems to be heading in the right direction.

“We are in talks with the Hajj Ministry in Pakistan to make the band compulsory for Pakistani pilgrims. They seem very interested in using the product,” Khan said.