Economy braces itself for flood damage

Economy braces itself for flood damage 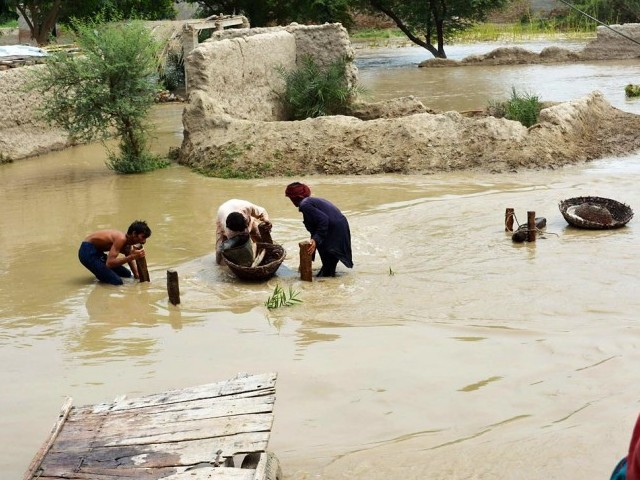 KARACHI: With the arrival of the monsoon season a foreseeable catastrophe that would devastate the economy is swiftly becoming a reality – river floods.

Although the scale of damage expected from this year’s floods is not what the country has seen in the last five years, threats to different sectors like agriculture, transportation, construction, cement and fertiliser are still there, a Topline Securities report said on Monday.

Agriculture sector, which has 21% weight in the gross domestic product (GDP) with major crops accounts for 5.4% of GDP, is the most vulnerable sector.

The report stated that it is too early to predict the exact impact of heavy rains and flooding but if the situation prolongs and affects other areas, it could affect other Kharif crops including rice, sugarcane and maize.

Until now, the intensity of recent flood appears much less than 2010 level, it is comparable with the floods in 2014 and 2013 in which Pakistan’s economy suffered  monetary losses of Rs44 billion (0.2% of GDP) and Rs196 billion (1% of GDP) respectively, the report said.

According to reports, around 400,000-500,000 of cotton bales (4% of cotton production) have already been affected from floods that could marginally affect agricultural output and GDP growth.

So far, key provinces where agriculture and industrial activities are the primary sources of livelihood like Punjab and Sindh have not been affected so badly. However, in case of continuous rains in northern Pakistan, possible floods can create problems in these two provinces.

According to a recent report by US world resource institute, Pakistan’s GDP is affected by 1% annually due to river flooding, which translates into Rs274 billion or $2.7 billion. During the last five years, floods have cost Pakistan around Rs334 billion or $3.7 billion a year.

Apart from major losses to agriculture sector, transportation sector also gets affected due to floods which disrupt the flow of goods in different parts of the country, which could result in higher food prices.

Food inflation has a weight of around 35% in consumer price index (CPI) and any uptick in food prices could lead to higher inflation. The government has set an inflation target of 6% in fiscal year 2016 while we expect inflation to range in between 5.5 to 6%, the report added.

Manufacturing facilities are also anticipated to remain affected due to flood related damages and the sector would also suffer because of infrastructure loss that affect transportation sector.

Due to this, industry sales, especially cement and fertiliser would decline in the short run while construction activities will slow down due to rains and flooding.