Zimbab­wean author­ities are tracki­ng a Spania­rd who allege­dly paid €50,000 to kill Cecil with a bow and arrow
By Web Desk
Published: July 27, 2015
Tweet Email 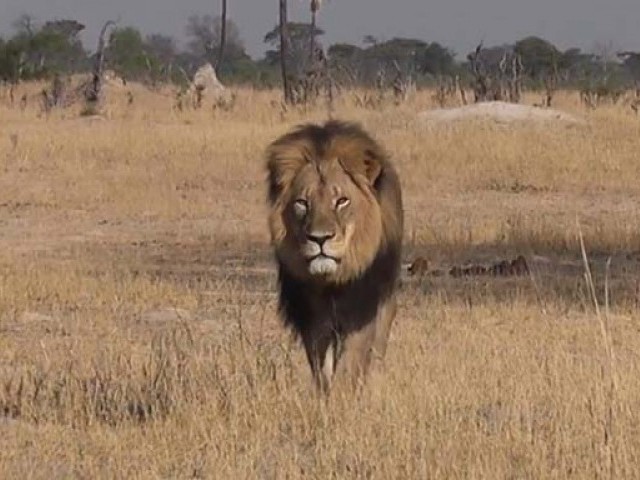 Cecil, one of Africa’s most famous lions, was killed and beheaded in Zimbabwe’s Hwange national park.

Zimbabwean authorities are now looking for a Spaniard who allegedly paid €50,000 to kill and skin Cecil.

It has been speculated that the GPS collar which the 13-year-old lion was wearing was used to track it down before he was lured into leaving the park and hit it with a bow and arrow. The hunters then tracked the injured animal for 40 hours before finally killing it with a rifle.

Cecil’s headless body was found outside the town of Hwange.

“Cecil’s death is a tragedy, not only because he was a symbol of Zimbabwe but because now we have to give up for dead his six cubs, as a new male won’t allow them to live so as to encourage Cecil’s three females to mate,” said Johnny Rodrigues, head of the Zimbabwe Conservation Task Force. “The two people who accompanied the hunter have been arrested but we haven’t yet tracked down the hunter, who is Spanish.”

While the Zimbabwe Professional Hunters and Guides Association admitted that its members were involved, claims have emerged that the lion was killed on a private safari making the hunt legal. However, the Zimbabwean government refuted the claim insisting that the lion lived on the reserve and came under its protection.

Meanwhile, police are searching for the lion’s remains among the country’s taxidermists.

On the other hand, the Spanish conservation organisation Chelui4lions has written to Cites de España, a body that oversees the import of endangered species into Spain, urging it to prevent the import of Cecil’s head as a trophy.

The article originally appeared on The Guardian

One minor a day reported for radicalisation in Britain