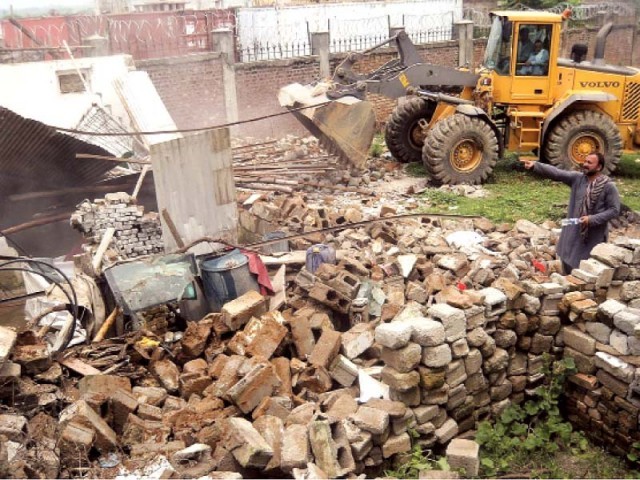 A small-scale operation against slums is already under way in the capital. PHOTO: FILE

Furthermore, the court ordered the civic agency to start the campaign from Sector I-11, one of the worst sectors that is the worst affected by illegal slums, and submit a compliance report on July 31.

A single-judge bench of Justice Shaukat Aziz Siddiqi heard the petitions filed by Azizur Rehman and others seeking their allotted land vacated from slum dwellers.

When representatives of an alliance of katchi abadis requested the court to revisit its order against the slums, the judge observed that the representatives were neither a party in the petition nor aggrieved by the order.

Raja Adnan, counsel for CDA, informed the court that a plan had been prepared, and submitted to the court on June 27, to remove illegal slums from different sectors.

He said under the plan, CDA directorate of municipal administration would launch an awareness campaign asking slum dweller to voluntarily vacate the occupied land. He said the awareness drive would take time.

The bench observed that people who had been allotted plots by the CDA in 1985 were still awaiting possession of land while the illegal occupants were gradually encroaching upon land in the name of slums.

Justice Siddiqi remarked that after a lapse of 30 years, the CDA was still asking for more time to hand over plots to allottees.

Subsequently, the bench directed authorities to immediately remove katchi abadis with the help of law-enforcing agencies and start the campaign from Sector I-11. The court also sought a compliance report from the CDA at the next hearing, scheduled for July 21.

Taking to the media outside the court, CDA Deputy Director General Land Hamza Shafqaat said the plan would be executed with the help of Rangers, Islamabad Police and the district administration from Monday.

He said the drive will be started from Sector I-11, where about 150 plots were occupied by slum dwellers, and then taken to other sectors.

As part of the pre-operation activities, the civic agency has also proposed cutting all utilities to illegal katchi abadis.

Earlier on June 4, 2015, the IHC had directed interior secretary, CDA chairman and the Islamabad IGP to evolve a plan to remove illegal slums. The plan was prepared and submitted to the court on June 27.