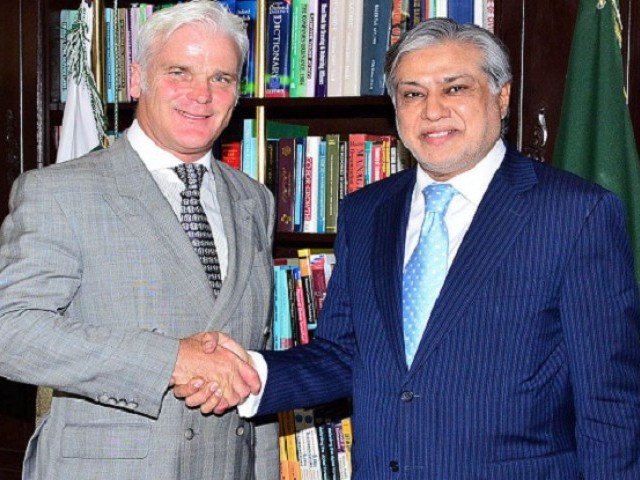 As international non-governmental organisations (NGOs) operating in Pakistan come under increasing scrutiny, the United Kingdom has dispatched a deputy minister to assure Islamabad it will continue to assist development in the country.

Britain’s Minister of State for International Development Desmond Swayne met Finance Minister Ishaq Dar on Wednesday and discussed with him economic assistance the UK will be providing to Pakistan.

The visit comes on the heels of Pakistan’s decision to reverse a ban on the activities of Save The Children International in the country after the UK threatened to sever economic ties with Islamabad.

It also coincides with the finalisation of UK’s bilateral economic assistance plan for the next five years (2016-2020). Although the UK has not yet revealed the exact amount of aid earmarked for Pakistan, Islamabad is expected to receive roughly $1 billion in assistance. The plan is expected to be finalised in the next two months. Under the outgoing plan (2006-2015), the UK committed $2.1 billion in aid to Pakistan. A significant amount of it has already been disbursed.

Swayne’s visit was aimed at reviewing the impact of British assistance to Pakistan of the past few years. It also sought to gauge sector-specific needs under the new five-year economic assistance package, known as Partnership Principle Appraisals, which is expected to come into force next year, a senior finance ministry official said after the meeting.

Dar lauded the role of the UK in social development in Pakistan and welcomed further expansion in its development-oriented activities, according to a finance ministry statement. Swayne said that the UK government looked forward to further strengthening economic cooperation with Pakistan.

In recent years, the UK has become one of Pakistan’s leading bilateral donors and has been steadily providing grants in social and economic sectors.

However, bilateral economic ties faced a serious threat in recent months after Pakistan slapped a ban on Save the Children International. The UK had threatened that it would cut its economic assistance to Pakistan besides withdrawing support from key International Financial Institutions, according to the officials privy to the discussions. This forced the government to reverse the ban, allowing all the INGOs to continue work.

Swayne reiterated support for the Benazir Income Support Programme (BISP), according to a press note issued by the UK High Commission in Islamabad. He also met BISP Chairperson Marvi Memon.

DFID also agreed to a revised memorandum of understanding (MoU) with the BISP Secretariat and the Economic Affairs Division. The MoU covers three new agreements. It brings forward some of the core financing for the BISP and agrees to support the enrolment of 500,000 children of BISP beneficiary families in primary schools through a supplementary conditional cash transfer till 2017, according to the UK High Commission.

Britain also agreed to support beneficiary communication and outreach, and would allow use of its funds for a planned poverty-survey to be conducted by BISP. The survey would help verify that all BISP beneficiaries are amongst the poorest people in the country.

The UK has so far committed roughly $430 million assistance for BISP besides giving another $300 million for vocational education. It has also been providing assistance for education and health sectors in Punjab and Khyber-Pakhtunkhwa.