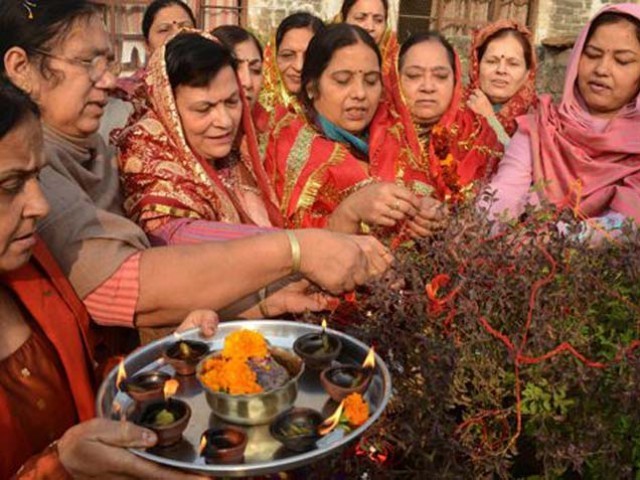 Hindu devotees tie holy thread around the Tulsi plant as they celebrate Tulsi Vivah at a temple in Amritsar on Saturday. PHOTO: AFP

Muslim Rashtriya Manch (MRM), an affiliate of Rashtriya Swayamsevak Sangh (RSS), has been planting “Tulsi” (Holy Basil) at the houses of Muslims terming it as ‘Jannati jhaad’ (heavenly bush).

MRM coordinator Merajidhwaj Singh claimed that Tulsi, which is considered a revered plant by Hindus, has been mention in the Holy Quran as ‘Jannati jhaad’.

Claiming that not only Tulsi, but Peepal has also been mentioned in holy texts, Singh said MRM is making efforts for the plantation of the said tree’s saplings near mosques, graveyards, shrines and at parks in Muslim dominated areas.

During Ramazan, MRM had launched a special drive to ensure that maximum number of Muslims either plant Tulsi saplings at their houses or Peepal tree at parks, graveyards or dargahs.

A local coordinator of MRM in Rouhelkhand, Maulana Mohammad Islam Sultani, claimed that he has distributed as many as 1,500 Tulsi saplings to Muslims. “I have been quoting holy texts to the brothers of the community about what has been said about the plant which otherwise also has medicinal properties as it keeps several disease away from the home where Tulsi plant has been planted,” Sultani said.

Sultani, who had also planted a Peepal sapling during the World Environment Day at Sultan Shah’s Shrine in Bareilly said, “The sad part of the society is that even trees and plants have been divided in the name of religion.”

Imam Maulana Mohd Javed of Noori Mosque at Krishna Nagar, where a stall would be set up to distribute Tulsi saplings, said Tulsi has been mentioned as ‘Rehan’ in holy texts. “I have myself convinced the people about it being mentioned in the holy texts and got the texts translated in Urdu to make them understand easily,” said Javed adding that “Tulsi is mentioned as Rehan in the 27th chapter of Holy Quran. Similarly, it is also mentioned in Hadith from Bukhari Sharif and Tirmidhi.”

However, another cleric Maulana Habeeb Haider said that even though there is mention of many trees in the Holy Quran, it is hard to reach to a conclusion that Tulsi has been specifically mentioned.

The article originally appeared on The Time of India

US ‘disturbed’ by Iranian leader’s criticism after deal