Fast food chain wants its loyal custom­er base to quite litera­lly take a second look at its 'buns'
By Web Desk
Published: July 21, 2015
Tweet Email 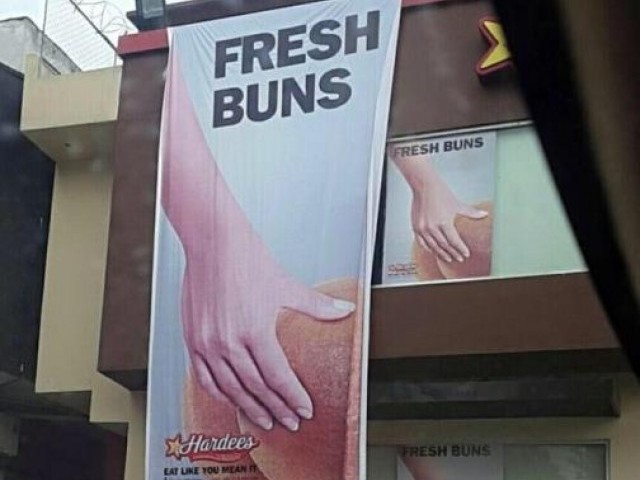 Fast food chain Hardees, a sister brand of the American Carl’s Jr, is known for its juicy burgers and milkshakes. But the global favourite, which landed its feet in Pakistan in 2009, now wants its customer base to quite literally take a second look at its buns.

A new advertisement seen on the fast food chain’s Lahore outlet has everyone talking. The ad captures two buns neatly placed together and a woman’s hand firmly grabbing one. The ad reads ‘fresh buns’. The innuendo can hardly be missed. While the Hardees’ marketing team definitely pushed the envelope with this one, not everyone seems to be happy about the ad.

Hardees has done a pretty idiotic job with it's latest posters. There are three hundred different ways of advertising fresh buns.

Either Hardee's marketing team is too naïve or too beyhooda. One of the two. pic.twitter.com/KhRW8RjAID

Hardee's… they really need to review their marketing strategy pic.twitter.com/PENxMRMshe

That Hardees ad is awfully lewd; revolting advertising strategy for a restaurant. #jahaalat

Some were a little more forgiving

people going nuts over the hardees ad. i wish the same outrage was shown towards issues that were much more important smh

Subliminal Ad campaing by Hardees Brand Managers. Many are criticizing the ads but they already nailed it #GotViral pic.twitter.com/TDKNGPdMim

The adverts for Hardee's were pretty brilliant.. I mean.. You're the one with the dirty mind, they just talkin bout food

This isn’t the first time the fast food giant has used controversial marketing techniques. Before its launch in Pakistan, Hardees released a stream of advertisements geared to stir controversy.

The fast food chain’s ‘unbuckle your belt’ advertisement, which featured a pair of jeans with an open zip, being one of the notable ones.