Toll soars to 90 after IS car bomb guts Iraq town

Toll soars to 90 after IS car bomb guts Iraq town

The crater left in the main street of the town's centra­l Al-Khan neighb­ourhoo­d was about five metres wide and two deep
By AFP
Published: July 18, 2015
Tweet Email 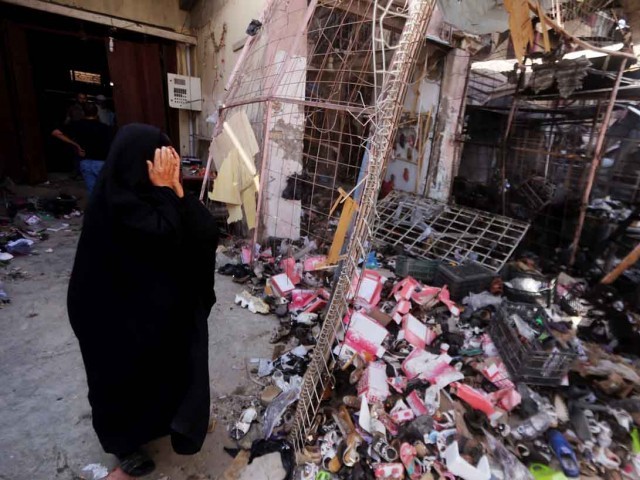 An Iraqi woman reacts as she stands amid the debris in the aftermath of a massive suicide car bomb attack carried out by the Islamic State group in the predominantly Shia town of Khan Bani Saad, 20 km north of Baghdad, on July 18, 2015. PHOTO: AFP

KHAN BANI SAAD, IRAQ: Rescuers in the Iraqi town of Khan Bani Saad said they were searching collapsed buildings for bodies Saturday after a huge car bomb ripped through a busy market, killing at least 90 people.

The suicide attack by the Islamic State group was one of the deadliest since it took over swathes of Iraq last year and came as the country marked Eidul Fitr, the feast that ends the Muslim fasting month of Ramazan.

Residents recounted scenes of horror in the aftermath of Friday’s attack, in which officials said at least 15 children died.

Muthanna Saadoun, a municipal employee who drives a street sweeper, used his truck to help put out the fires that the blast caused in the market area.

“People were burning in their cars because no ambulances or fire engines were able to reach them,” the 25-year-old said.

IS said the suicide attacker had three tonnes of explosives in his vehicle. The crater the explosion left in the main street of the town’s central Al-Khan neighbourhood was about five metres wide and two meters deep (16 feet wide and more than six deep). Cuts of charred meat were still hanging from the hooks of one butcher’s stall that was ravaged by flames. PHOTO: AFP

Several collapsed buildings were still smouldering 12 hours after the attack.

A child’s toy elephant lay in the middle of the street as a defence ministry bulldozer shovelled the debris and cleaners swept blood-stained water.

“What we witnessed yesterday cannot be described. Fire, bodies, wounded, women and children screaming… Al-Khan is now a disaster zone,” said Salem Abu Moqtada, 34, who sells vegetables in the market.

“The toll so far is 90 martyrs and 120 wounded, and we have between 17 and 20 missing,” Abbas Hadi Saleh, the top official in Khan Bani Saad, told AFP.

“Every year (during Ramazan) there’s a bombing. We are guilty of being Shia,” he said. “This is the biggest in Diyala since 2003.”

Markets are usually packed in the days before the holiday as people preparing for large family gatherings shop for food and clothes.

Khan Bani Saad, which is only 20 kilometres (12 miles) from Baghdad’s northern outskirts, lies in Diyala province. The town is predominantly Shia but has Sunni minority.

“We do not have an Eid,” said Hussein Yassin Khidayyer, a 45-year-old shop owner. The force of the blast threw him to the back of his shop but he escaped unscathed.

“No one wished each other a happy holiday,” he said.

Eidul Fitr is one of the most important dates in the Islamic calendar and traditionally sees families gather to celebrate the end of a month during which many fast from dawn to dusk.

IS said in its claim that the attack targeted Shia militias, a claim it often makes even when most of the victims are civilians.

According to witnesses and officials, the bomb went off at a checkpoint guarding an entrance to the market.

Vehicles could be seen heading south from the town with coffins on their roofs taking some the bombing’s victims to be buried in the Shia holy city of Najaf.

Baghdad announced in January that Iraqi forces had “liberated” Diyala, significant parts of which had been overrun by IS after the jihadists launched a brutally effective offensive last June.

The jihadists no longer have fixed positions in the province but have reverted to their old tactics of planting car bombs and carrying out suicide operations or hit-and-run attacks.

Prime Minister Haider al-Abadi condemned the attack as “a despicable crime by the “Daesh (IS) terrorist gangs”.

“We are determined to hunt them down on the battlefield and in every corner of Iraq until we get rid of the last terrorist,” he said in a statement.

Iraqi forces are currently pressing a broad offensive in Anbar, where they are tightening the noose on IS in the western province’s two main cities, Ramadi and Fallujah.

“This horrible carnage is truly outside all boundaries of civilised behaviour,” he said in a statement.