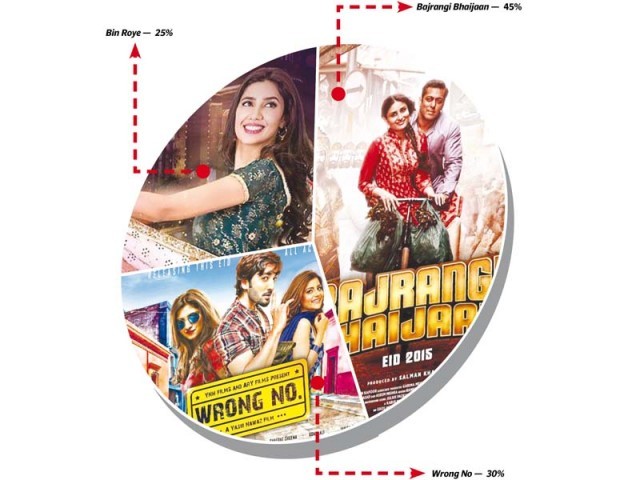 While Bajrangi Bhijaan will definitely get the lion share of the earnings, Wrong No can surprise by coming second in the race. PHOTOS: PUBLICITY

Never has so much drama and excitement surrounded an Eidul Fitr weekend at the Pakistani box office. With marquee Pakistani film releases being held back for Eidul Azha, this religious holiday would feature two Pakistani films, Bin Roye and Wrong No competing for the box office crown with not only each other but also with Bajrangi Bhaijaan.

It already appears that Pakistani movies have their work cut out as they would be facing an uphill task of outperforming Salman Khan’s box office on Eidul Fitr — a holiday weekend that has become synonymous with the Indian actor. Here are the strengths and weaknesses of each of these films.

Salman Khan’s love affair with ‘choti Eid’ has been well-documented in the past. With all his previous releases — Dabangg, Bodyguard and Kick — during the religious holiday all going on to do remarkable business at the box office.

According to exhibitors, the chances of this trend being repeated is very high. They have pointed out to several factors most notably the star’s popularity coupled with the fact that the film also has a “Pakistani theme” attached to it which makes it more relatable for local audiences.

Several single-screen cinemas, such as Bambino, have termed Bajrangi Bhaijaan as the real ‘money-maker’ and expect Salman to be the king of the box office once again.

Unlike the other two films that it is releasing opposite, Bin Roye, has an element of traditional Pakistani TV serial-like drama to it. Described as a family film, Bin Roye, not only benefits from the star power of Mahira Khan (and somewhat Humayun Saeed) but also the brand name of HUM Films.

Even though the movie may not be ideally suited for single-screen cinemas it would be playing in several such theatres across the country. Capri Cinemas has already given two of its most lucrative time-slots to the movie including the 9PM to midnight screening time.

As advanced bookings are underway, the film has already captured the audience’s attention with Super Cinemas in Lahore noting that so far the collective demand for Bin Roye and Wrong No is greater than that of Bajrangi Bhaijaan in the Punjab circuit.

Wrong No : The Rebel

Not as much a ‘dark horse’ as a ‘mercurial outsider’. Wrong No, a comedy film in the same vein as last year’s Na Maloom Afraad, the movie has all the ingredients to cause a major upset at the box office.

Already several cinemas — both single-screen and multiplexes — have shown a readiness to screen the movie and have chosen it as their second-bet after Bajrangi Bhaijaan.

According to Cinepax Cinemas, Wrong No has already managed to impress in advanced bookings and despite being described as a ‘raunchy’ comedy, it is one movie that will lure Pakistani audiences to cinemas.

Wrong No’s box office fate might be very similar to that of Na Maloom Afraad. Like the previous movie it will also benefit from the ‘snowball effect’ and pick up business in the second week.

Despite the number of shows for Wrong No in multiplexes like Nueplex Cinemas are fewver as compared to the other films, it will capitalise on the footfall of Bajrangi Bhaijaan and Bin Roye.

Like last Eid, none of these three releases are expected to shatter any box office records. Several exhibitors believe that the real business would happen following Eid as unlike Bollywood films which end up falling victim to piracy, Pakistani films tend to have a longer life. However this is how we think that the total box office earnings will be divided on Eid:

Fashion in the fast lane