A pizza that replac­es the crust with a fried chicke­n breast­
By Entertainment Desk
Published: July 10, 2015
Tweet Email 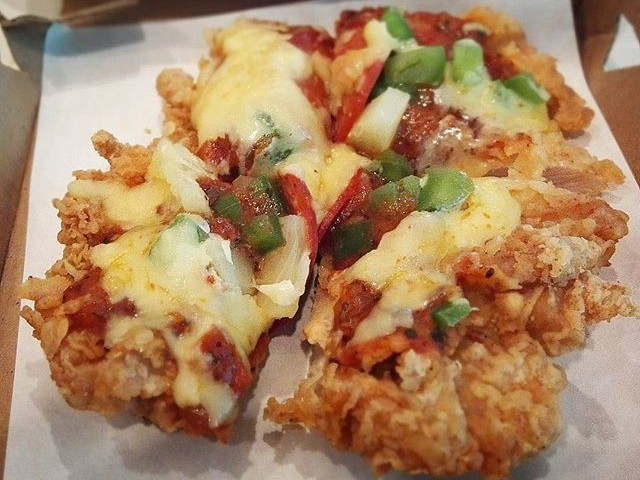 A pizza that replaces the crust with a fried chicken breast.

Tired of eating the regular, conventional pizza? Forced to eat the tasteless dough after finishing the yummy cheesy, saucy part? Yeah, most just end up leaving the crust. What a shame. But KFC has revived ye olde pizza with Chizza!

Have you ever thought of having chicken as a crust to your favorite pizza? We did. So here's the new #KFChizza! pic.twitter.com/nXZm9Skt15

According to Buzzfeed, Chizza is essentially a pizza that replaces the dough crust with a fried chicken breast. A piece of fried chicken is covered in pizza sauce, cheese, and other toppings like pineapple and green peppers and is then baked…

It sounds yummier than a pizza because it promises juicy chicken rather than dry dough crust. A definite treat for the taste buds.

But sadly this hybrid of fried chicken and pizza is only available at KFC in Philippines. The mash-up is not available elsewhere.

Who needs crust when you have chicken? Introducing the new #KFChizza! pic.twitter.com/dStRN5PzU5

Chicken over bread! Any given day!

Thick crust, thin crust. Don't think about it. We have our chicken as the pizza crust. #KFChizza pic.twitter.com/v6UTrsFfCl

This roza is becoming difficult with every passing second!

Who in their right mind would say ‘No’?

KFCs abroad seem to be way ahead than other food chains in terms of food experimentation. The fast food chain recently introduced this Napoli Crispy Pizza Chicken at their Hong Kong locations.

Unlike the KFC restaurants in Pakistan, the locations in the Philippines also offer a breakfast buffet.

Drool over this mouthwatering breakfast symphony! The KFC Breakfast Buffet is back with a twist! Now you may enjoy unlimited servings of our Filipino breakfast specials PLUS unlimited waffles you can customize with various toppings to choose from. Available on all weekends of June 13-July 5, 7:30AM-10AM for only P199 in selected KFC stores! Click bit.ly/KFCWaffleBuffet to learn more.

Sweet and savory! Fulfill your breakfast cravings only at the #KFCBreakfastBuffet. Enjoy unlimited servings of your breakfast favorites with our new waffles and toppings! See you this weekend ☺️

Life goes on. But our waffles go on and on and on. Don’t miss the KFC Breakfast Buffet! Visit http://t.co/EUSMEMDdaj pic.twitter.com/uo0yldmxhG

Don't miss the last weekend of the KFC Breakfast buffet! See you there!:)Check out http://t.co/EUSMEMDdaj for details pic.twitter.com/iUAwHO6Fma

The way to a man's heart is through his stomach <3 #KFCFridate pic.twitter.com/HXY6c0ZizA