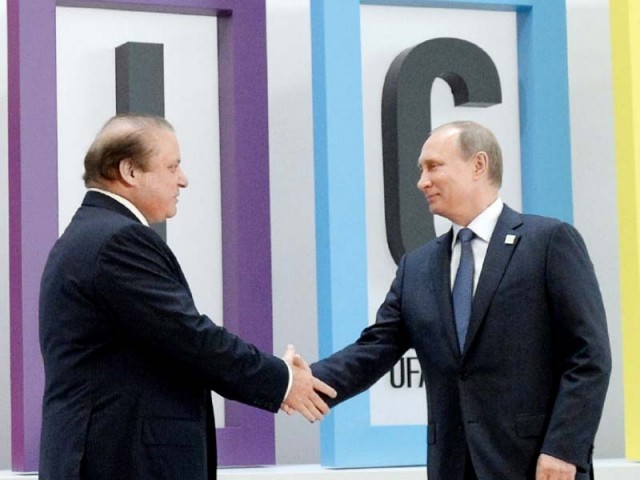 While addressing the BRICS outreach meeting on the sidelines of the SCO summit, he said Pakistan’s fight against terror, including an ongoing cross-country military operation, was not only for the protection of its people but was also very critical for establishing peace in the region. The premier said that Pakistan had rendered huge sacrifices in terms of human and economic losses. “But this has not weakened our resolve to fight against extremism and uproot terrorism,” he said.

“We remain absolutely determined to take this campaign to its logical conclusion in order to achieve our objective of a peaceful and prosperous region,” he said, calling for commitment to work together to promote peace and development in the region and beyond in a true spirit of collaboration and cooperation.

PM Nawaz had earlier arrived in Ufa from Oslo on the second leg of his visit to lead the Pakistani delegation at the 15th Shanghai Cooperation Organisation (SCO) Summit and the 7th BRICS Summit. BRICS is an association of five emerging national economies comprising Brazil, Russia, India, China and South Africa that represent almost three billion people, or approximately 40% of the world population.

For the uplift of people, he suggested a four-pronged approach encompassing people-to-people contact, confidence-building in peace and security, trade, and regional connectivity.

Calling for promoting confidence among the member countries, he said confidence-building measures in peace and security were an essential ingredient for endeavours towards shared prosperity.

He suggested promoting bilateral and regional trade and commerce, coordinating cohesive laws, reducing tariff and non-tariff barriers and easing the movement of people and merchandise across borders.

He also congratulated Russian President Vladimir Putin, who had earlier received him before the meeting, on hosting the 7th BRICS Summit and the 15th SCO Summit. “We are grateful to our host for bringing SCO and BRICS member community together under one roof. This would go a long way in promoting inclusive and synergetic approach to economic development,” he observed.

This interaction coincides with Pakistan about to become a full-member of the SCO forum.

Pointing out the path to progress adopted by the Pakistani government, Premier Nawaz said the country’s potential growth sectors, such as infrastructure, power and natural resources, were open to large scale investments.

“Pakistan’s economic growth has remained steady,” he said. “We have unveiled ‘Vision-2025’ to provide a solid platform for the revival of sustainable and inclusive growth.”

He also talked about his vision of “Peace for Development and Development for Peace” in the region, where regional connectivity and economic integration were key components.

Pakistan has been actively engaged with several regional forums, including SAARC and ECO. Pakistan will also be hosting summit meetings of both these important regional organisations in the future.

PM Nawaz said Pakistan had been collaborating with a number of SCO and BRICS members also to promote progress and prosperity of the people.

With Chinese collaboration, he said, Pakistan was building the China-Pakistan Economic Corridor as an important part of President Xi Jinping’s visionary initiative of “One Road and One Belt” and a “Community of Shared Destiny”.