His father struck it rich, Shan Masood struck it for six

His father struck it rich, Shan Masood struck it for six 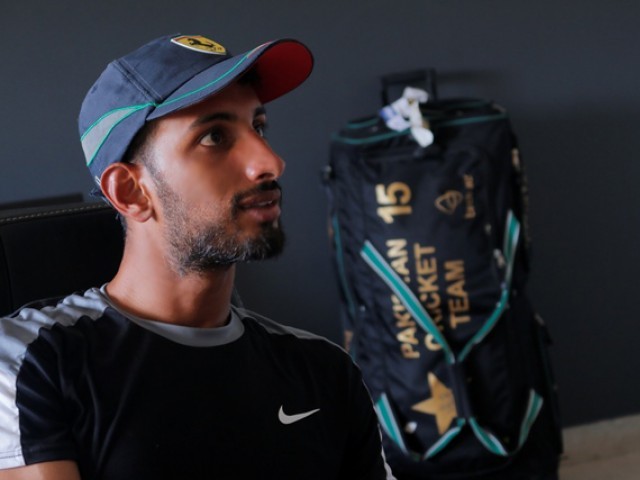 From his early days, Masood has had to fend off questions about his connections and the ‘parchi’ tag followed him to the point of harassment. PHOTO: TAYYAB GHANI

With seven scores in the nervous nineties at the first-class level, Shaan Masood was not willing to dally when he reached the 90 during his 125-run knock that helped Pakistan to a historic series win over Sri Lanka.

“At 90, I exposed my stumps and drove Dhammika Prasad for three. Next over, [Tharindu] Kaushal bowled a doosra that I stroked for three more runs. I got the strike again and [Angelo] Mathews called the field in,” revealed Masood at his Karachi residence in an exclusive interview with The Express Tribune.

However, that just played into the left-hander’s hands. “I had decided to come down the track and loft the ball straight to reach my hundred with a four. When the ball was delivered, I got there quicker than I had anticipated, and the ball was now perfectly in my zone, I said to myself, whack it as hard as you can.” Instead of a four, the ball cleared the ropes and went for Masood’s first six of the innings — the third of his international career and by far the most memorable he will ever hit.

All those years spent in dingy hotels across Pakistan, those tiring train journeys, those days of living off meagre daily allowance were all suddenly worth it. He now had his first Test hundred, and as the cherry on top, his guru was at the other end.

“Younus [Khan] walked up to me and said what have you done captain (the veteran’s nickname for Masood)? Why did you take that risk, and then asked ‘won’t you hug me now’,” revealed Masood.  “And in typical Younus fashion, he jokingly said, ‘Don’t look at the electronic screen, they have an ugly picture of you up’.” Masood also kept repeating skipper Misbahul Haq’s advice in his mind. “Don’t look at the scoreboard; play in this innings just as you played in the first,” he kept telling himself.

Misbah felt that Masood was in special touch when umpire Ian Gould succumbed to the relentless pleas of Prasad after twice shaking his head at the lbw appeal when the batsman was struck low on his pads.

“My teammates were bitterly upset at the lbw verdict in the first innings, but in the back of my head I had decided that I wasn’t going to let the decision hog my mind.”

On the eve of the first Test in Galle, Masood had impressed Waqar and Misbah with his batting. “A day before the first Test, Waqar told me that he was impressed by my improvement and that the decision to drop me was one the toughest he had taken in a long time,” claimed Masood. “He felt that whenever I would play I would do something incredible.”

At Pallekele, Waqar’s prophecy came true in a matter of a fortnight.

The struggles of the ‘Burger Boy’

The sporting world loves the story of a boy from a humble background making it big. The poor kid from the streets turning into a millionaire through sheer talent and strength of will.

Masood is the exact opposite of that story; born with a ‘golden spoon’, he gave up the comforts of his rich surroundings to pursue his passion for cricket. “The struggles of a boy from an affluent background is as real as that of a boy from a humble background,” said Masood, revealing that he often had to face snide remarks and doubts over his talent due to his background. “At 13 I ventured out to play U15 cricket, I took tedious train journeys at the U19 level and survived on measly allowances.”

Masood’s father, who is a member of the Board of Governors at the PCB, is the ultimate cricket buff but Masood insists that he told his son to carve his own journey.

“While my mother was in labour on October 14, 1989 (Masood’s birthday), my father was busy rooting for Pakistan as Wasim Akram took a hat-trick against the West Indies in a Sharjah ODI. He still has an incredible passion for the game, but trust me if my father was as influential as people make him out to be, then I would have been playing every game for Pakistan across all formats.”

From his early days, Masood has had to fend off questions about his connections and the ‘parchi’ tag followed him to the point of harassment.

The name-calling, however, never affected the left-hander. “I was never fazed by the labels that I was given,” he said. “However, I didn’t like people questioning my family’s interest in my cricket and their presence in the crowd during my matches.” Masood attributes his success to his ability to adjust. “I can mould myself according to the company I am in, I enjoy all delicacies around the country, I can joke with people from any background and make them comfortable, even in the Pakistan team I have great friends from diverse backgrounds.”

Masood is now no more a pariah — the left-hander has already found a place in Pakistan cricket folklore by churning out one of the finest maiden Test hundreds ever.

But Tests alone is not going to quench his thirst. “Like anyone I want to play all formats. I am working diligently on expanding my game; I have a few surprises in store.”

He has a long journey ahead but unlike past successes, Masood plans on celebrating this one for a few days before he returns to the endless grinds of an international cricketer.