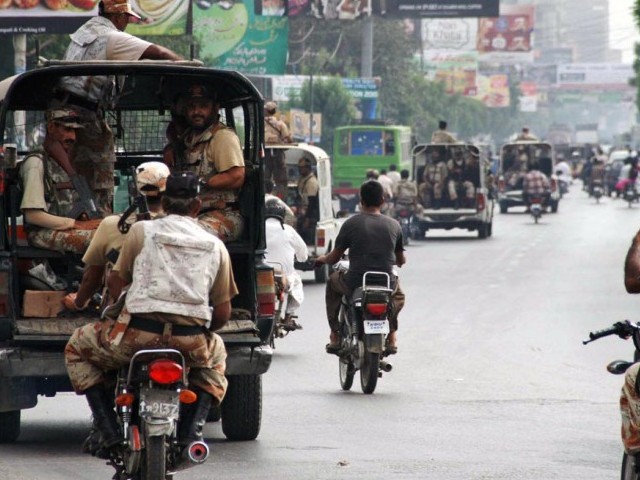 According to details, Sindh Chief Minister Qaim Ali Shah said that the provincial assembly will later deliberate on confirmation of their powers and deployment in urban centers under Article 147 of the Constitution.

A notification to this effect, under Anti-Terrorism Act, is expected to be issued by the provincial home department on Thursday.

Earlier, the former president had asked the Sindh chief minister to extend special powers for the paramilitary force.

“In the present situation the relation between military and civilian governments are praiseworthy for betterment of the country,” the former president said, adding that there was a dire need to strengthen these relations.

After these directives, Chief Minister Qaim Ali Shah convened a meeting of PPP leaders, legal experts, chief secretary among others to discuss the matter.

However, no notification had been issued by the provincial government ill the filing of this report. However, Shah did call Sindh Governor Dr Ishratul Ebad early on Thursday.

On the other hand, Zardari held a meeting with PPP leaders in Dubai. The meeting was attended by Sindh Finance Minsiter Murad Ali Shah, Sindh Information Minister Sharjeel Inam Memon, among others. They reportedly discussed the current political situation.

His statement comes after the interior minister said that the Sindh government would issue a notification extending police powers for Rangers by Wednesday night.

“Earlier, we had decided that we will withdraw Rangers from the metropolis after Youm-e-Ali, but after talks with Sindh Chief Minister Qaim Ali Shah, we have decided to extend their deployment,” Nisar had said.

He added that once the provincial government issues the formal notification, the centre would endorse it.