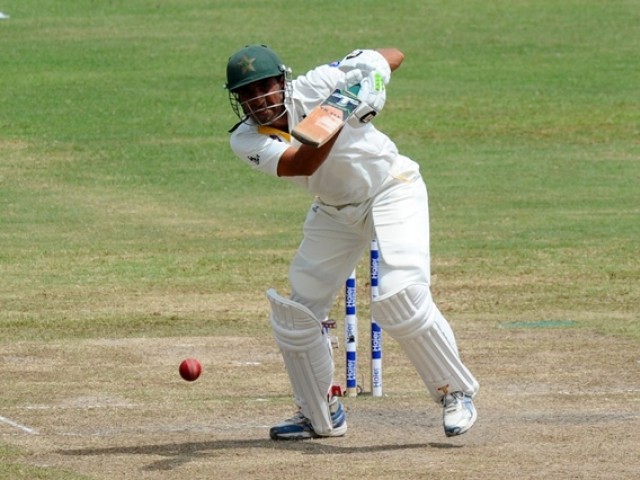 Pakistan cricketer Younis Khan plays a shot during the fourth day of the third and final Test cricket match between Sri Lanka and Pakistan at the Pallekele International Cricket Stadium in Pallekele on July 6, 2015. PHOTO: AFP

KARACHI: A scarcely believable unbroken 217-run stand between Shan Masood and Younus Khan has given Pakistan a genuine chance of winning the third and final Test of the three match series against Sri Lanka at Pallekele.

Set a 377-run target, Pakistan wobbled early when Ahmed Shehzad and Azhar Ali returned to the dressing room with only 13 runs on the board.

But Masood and Younus blunted the hosts in two sessions of magnificent Test match batting. The rookie Masood, playing his fifth Test, reached his first hundred with a thumping six against Tharindu Kaushal. He reached his ton off 172 balls and when the stumps were drawn for the day the left-hander was batting on 114. Pakistan were well placed at 230 for two, needing only 147 more runs to record their best-ever chase in Test history.

The veteran Younus posted his 30th Test century, becoming the first batsman in Test history to notch five centuries in the fourth innings of a Test. Younus playing his 101st Test reached the century landmark shortly before close, he ended the day at 101 off 166 balls.