If we can help to create a more compas­sionat­e, kind planet,it would be the most beauti­ful gift of all, says Dalai Lama
By AFP
Published: July 6, 2015
Tweet Email 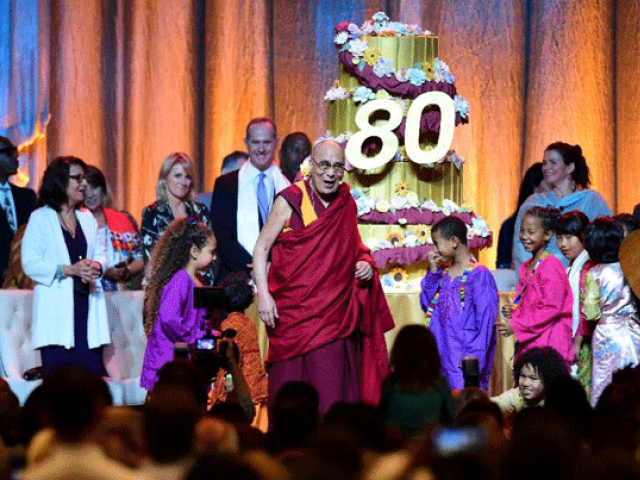 The Dalai Lama reacts as his birthday cake is wheeled out on stage following a performance for him by children at the Honda Center in Anaheim, California, on July 5, 2015 PHOTO: AFP

A string of minor celebrities also paid tribute to the crimson-robed 14th Dalai Lama ahead of his birthday Monday, although protesters also gathered outside the event south of Los Angeles.

“He always says he is just a simple Buddhist monk,” said anti-landmines campaigner Jodi Williams, who won the Nobel Peace prize in 1997, who sang a snippet of Happy Birthday to him.

The Dalai Lama was guest of honor at the Global Compassion Summit at the Honda Center in Anaheim, speaking on “awakening compassion” and the “transformative power of creativity and art.”

About 18,000 followers packed into the conference centre gave him a standing ovation during the three-hour event, at which he was presented with an eight-foot (2.4-meter) high birthday cake.

“The Dalai Lama does not want any physical gifts. For him, this birthday is just like any other day,” said Lama Tenzin Dhonden, founder of Friends of the Dalai Lama.

“However, if we can help to create a more compassionate, kind planet, that would be the most beautiful gift of all,” added the Buddhist monk, who broke down in tears at one point in his tribute.

“Whenever I get tired or I lose hope, I remember you,” said Iranian human rights campaigner and 2003 Nobel Peace prize winner Shirin Ebadi.

“For 60 years, you have been fighting for the rights of the people of Tibet without becoming tired and without losing hope.”

But not everyone is celebrating his birthday in California.

Protests were staged outside by Shugden Buddhists, who revere a deity denounced since 1996 by the Dalai Lama — whom they accuse of religious persecution.

Police stand guard in front of the Honda Center where protesters and supporters of the Dalai Lama gather on July 5, 2015 in Anaheim, California PHOTO: AFP

Several hundred demonstrators gathered outside the Honda Center, with some holding placards that read “Stop lying!” and “Hypocrisy.”

“The false Dalai Lama… changes Buddhism into political gain through lying,” said one leaflet handed out by protesters.

China accuses the Dalai Lama of trying to split Tibet from the rest of China and has called him a “wolf in sheep’s clothing.”

In 2011, the Dalai Lama delegated his political responsibilities to a prime minister elected by Tibetan exiles in an attempt to lessen his own totemic status and secure the movement’s future after his death.

But he remains the most powerful rallying point for Tibetans, both in exile and in their homeland.

The elderly monk’s promotion of non-violence along with his ready laugh have made him a global peace icon and kept Tibet firmly in the spotlight.

He has been a unifying force for Tibetans inside and outside the mountainous region, even if he has little to show for his decades of lobbying.

Formal negotiations with Beijing broke down in 2010 after making no headway.

Last year, the Dalai Lama told German newspaper Welt am Sonntag that doctors had told him he could live to 100, adding, “in my dreams, I will die at the age of 113 years.”

On Monday, the Tibetan religious figurehead will discuss climate change and “wisdom, vision and experience,” including with other Nobel laureates, while on Tuesday events wrap up with a session on youth leadership.

The Dalai Lama marked his official 80th birthday last month — on June 21 according to the Tibetan lunar calendar — in Dharamsala, his hometown in exile in India.

The 80-year-old, whose English is sometimes disjointed, said that everyone had the potential for compassion, including violent extremists.

“We all come from our mother. We all have the deep experience, we all appreciate the mother’s reaction. Some, also including the so-called terrorists… they also have the potential to develop compassion,” he said.

“Some of the people who utilize hatred… If we express (a) message of love, message of compassion, then these people… they realize peace is the only way for (the) survival of humanity.”