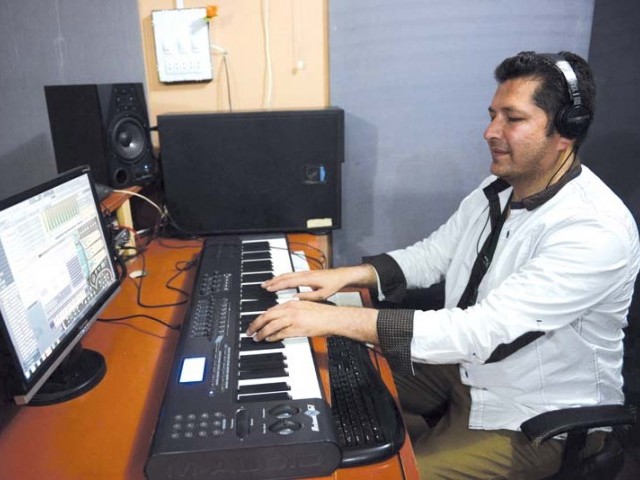 A lover’s eyes compared to a drone strike, a smile to a suicide bomb and lips to fire.

The violence of Pakistan’s bloody insurgency has been injected into catchy pop lyrics after more than a decade of war against Islamists opposed to all forms of song and dance.

Some of the hit songs are regarded as deeply poignant in the country’s conservative Pukhtun belt — but others are criticised as sensationalist, and accused of capitalising on the brutality.

An actress gyrates her hips in response, singing: “Look at me, bomb my heart, come destroy everything.”

Then the hero, jumping, rolling and dancing, replies: “My Laila is carrying bombs in her eyes, you are killing me with your eyes, your lips are on fire — your short top is killing me and your trousers are tight.”

The song, which accompanies the popular 2012 Pashto film “Ghaddar” (Traitor), is still a top hit on video websites such as YouTube and Dailymotion.

Fata and Khyber-Pakhtunkhwa has borne the brunt of the country’s bloody decade-long battle with homegrown Islamist insurgents and is the focus of the CIA’s drone missile campaign against militant commanders.

The frequency of the violence people have witnessed in that time has seeped into popular culture, artists say, leaving a sometimes incongruous mark on the region’s cultural output.

In another Pashto movie, “Da Khkulo Badshahi Da” (Beautiful Are Always Crowned), released in 2014, a wiggling actress sings at the centre of a group of armed men, some clutching bottles of liquor and dancing.

“My lips are sugary, I sing sweet songs, my intoxicating look is like a full glass of wine,” she says, before singing the song’s title lyric: “I attack with my eyes, as lethal as a drone strike.”

Not everyone is impressed. Popular Pashto singer Bakhtiar Khattak said some artists were cashing in on the bloodshed that has become an everyday feature of life since the Islamist insurgency rose up in 2004.

“It is true that poets write what they see in society but some film makers are deliberately mixing violence and vulgarity in songs,” he said.

“Despite substandard poetry, a segment of the society likes such songs, it’s now a market trend, they (producers) do it to get more business.”

Other songs set against the backdrop of war, however, are considered moving.

Singer Zafar Iqrar penned a song asking his lover not to return to their home village, abandoned because of an army operation.

“Oh my beloved do not come to the village — here everyone is mourning, you will feel ashamed — here, division and hate rule supreme.”

Pashto-language poet and writer Rokhan Yousafzai said the taste for such songs reflected the experiences many people had been through over the past decade.

“No doubt the language is offensive, the scenes are vulgar but despite that ordinary people like such songs and movies,” he said.

“It’s a fact that violence has affected our society, our culture, poetry and film songs.”

Aslam Taseer Afridi, a Pashto language poet and professor of history who also heads a government college in the Khyber tribal district, said the conflict in the region has not only affected music but ingrained itself even in the games children play.

“You see when the kids play, one group act like soldiers and the others act like militants and these are the psychological effects of this dilemma on our society,” he said.

Sometimes singers are inspired to create music for peace. In the wake of the country’s deadliest terror attack last December, when Taliban gunmen massacred more than 150 people at an army-run school, some of the country’s leading singers released records to fight radicalisation.

Khattak, along with female singer Laila Khan and a team of lyricists, paid tribute in song: “Opposed to peace, love and knowledge, who are they? Killers of our generations.

“They dishonoured sisters and brought tears to mothers’ eyes, they turned dreams to dust… they are the killers of peace.”

The Taliban, opposed to most forms of artistic expression, have destroyed important cultural heritage sites too.

“Militants even bombed the shrines of poets who wrote and preached for peace,” Taseer said, referring to the legendary 17th-century poet Rahman Baba, whose mausoleum was attacked in 2009.

Popular language can be one way of fighting back against the militants in their razing of local culture, however.