Cost of a dip: Swimming in open water poses threat to health

Cost of a dip: Swimming in open water poses threat to health 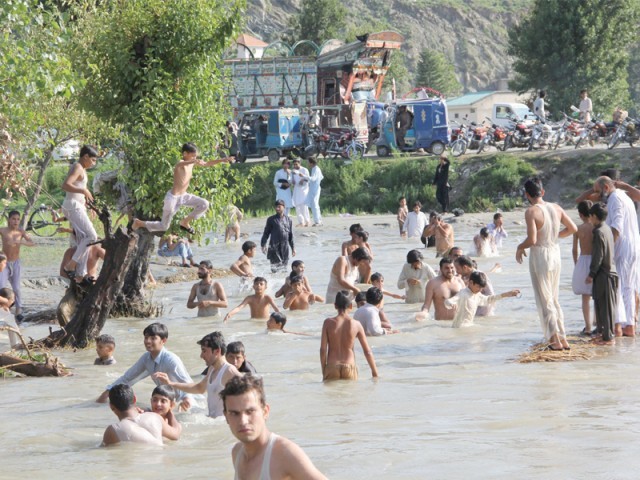 Pick up any newspaper, turn on the telly during a lean news day in the summer and shots of semi-clad boys and men in muddy water will be everywhere. Not a pretty picture but part of the very real problems caused by the trifecta of a power crisis, a hot summer and a lack of recreational alternatives.

Packed canals in Kohati, Shoba Bazaar, Faqirabad, Ahmad Khel, Warsak Road and other areas look tempting, considering living without electricity is the norm across the country. Yet that dip in the canal does not come without a cautionary tale.

Medical experts say swimming in these open and often stagnant water bodies poses serious threats to health and, at times, the environment.

When contacted, Dr Wahab of Lady Reading Hospital (LRH) told The Express Tribune the canals in the city are filled with garbage, sewage and toxins. “Swimming in contaminated [water bodies] can cause diarrhoea, vomiting and gastric diseases, skin, ear, nose, throat (ENT) diseases, and even urinary tract infections.”

A big pool of faeces?

Wahab said in rural areas, cows and buffaloes also bath in the canals alongside humans. “Cows urinate in the water and swimmers swallow the same water.” Animal urine—especially cattle—is known to cause Weil’s disease. Though 90% of the cases, according to most medical sources, are mild infections with fever, nausea, chills and flu-like symptoms, Weil’s can also result in organ failure and internal bleeding.

Then there is the most common bacteria E.coli. According to WebMD, E.coli poses a great threat to people using water contaminated with infected human or animal faeces. If not treated properly, E.coli can result in blood and kidney problems.

“People can become infected when a contaminated city or town water supply has not been properly treated with chlorine or when people accidentally swallow contaminated water while swimming in a lake, pool, or irrigation canal,” says WebMD’s website.

According to a 2012 UN study, “contaminated water contributes to 40% death in the country as an estimated number of 250,000 deaths occur within Pakistan as a result of water-borne diseases.”

Talking to The Express Tribune, Naimat Gul, who was swimming in the Shoba Bazaar canal said, “I came here because this is the easiest and cheapest option for me [to cool down].” He added, “I belong to the underprivileged class and can’t afford an air-conditioner – so I swim here.”

With such high temperatures and unscheduled power outages, staying indoors was intolerable, said Gul. He maintained, “Whenever I feel hot, I come here with my friends for a swim.”

Interrupting Gul, Rahat Khan, another swimmer there, said, “We enjoy swimming for free that’s why we come here.” Swimming pools have fees, he added. “An open canal is free, that’s why you see a rush here.”

When the temperature rests between 42 and 45 degrees, most people chose to ignore the risk of bacteria to avoid heat strokes. While they don’t have to worry about a Jaws-like situation, the water people choose to wade into definitely has a bite. Yet, would swimmers make the same decision if they know that according to the World Health Organization, “diarrhoea kills children at a rate equivalent to a jumbo jet crashing every ten hours”?

Where’s my class? No room for students who are differently abled