As the inquiry commission investigating rigging allegations in the previous elections continued hearing arguments on Thursday, PML-N counsel Shahid Hamid said there might have been some lapses but insisted the ROs did not misuse the extra ballot papers.

The general elections 2013 as a whole could not be declared void on this ground, as extra  ballot papers alone could not be termed election rigging, he contended.

The three-judge panel, headed by Chief Justice Nasirul Mulk, is to conclude its proceedings today (Friday). This will be the 39th hearing of the commission. The election commission’s counsel, Salman Akram Raja, is likely to record his arguments. The panel has recorded the statements of 39 witnesses.

Earlier, the chief justice asked the Election Commission of Pakistan (ECP) counsel to tell the judges why there was no uniform policy for the demand for ballot papers. In three provinces of Sindh, Khyber-Pakhtunkhwa (K-P) and Balochistan, the requisition of ballot papers was done by provincial election commissioners while in Punjab, this was done by the ROs.

The chief justice also remarked that Forms-15 should have been deposited in the treasury.

PML-N counsel Hamid defended that Punjab election commissioner had wisely assigned the task to the ROs, as the demand of 1.24 million ballot papers was reduced.

While also defending the conduct of ROs, he said though the officers had sent requisitions of printing extra ballot papers, they did not distribute them among the presiding officers (POs) and retained the same.

Chief Justice Mulk observed that no uniform policy was applied by the ROs in retaining the extra ballot papers. He also referred to the case of NA-125, where 128,000 ballot papers were retained.

The PML-N counsel seconded the statements of ROs that all extra ballot papers were accounted for.

Regarding the missing Forms-15, Hamid argued that Form 15 was found missing all over the country. In Punjab, the percentage of missing Form-15 was 28.8%, which was lesser than other provinces. In K-P, 42.5% polling bags had no Forms-15 while in Sindh, 45% of the polling bags had been found to be without Form-15.

He also stated that the POs and not ROs were responsible for the missing Forms-15.

The PML-N counsel also informed the court that of the 272 National Assembly seats, elections on 137 of them were not challenged. Election tribunals dismissed 112 petitions, 15 were allowed while 10 were pending.

About the role of ex-CJP, Hamid argued that Iftikhar Chaudhry allowed the judicial officers to act as polling officers in the 2013 elections, in view of the request made in national judicial (policy-making) committee meeting, participated by 16 political parties in September 2012.

Chief Justice Mulk asked the PML-N counsel to read the transcript of Justice Iftikhar’s speech while addressing the ROs in Lahore before polls 2013. According to the speech, there was nothing in it that suggested planning for systematic rigging.

Hamid said there was no evidence of wrongdoing against any of the ROs, and they performed their duties in difficult circumstances. 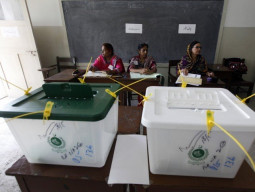 Gramscian | 5 years ago | Reply Yes. Every wrongdoing with regards to GE 2013 is either an irregularity or administrative lapse, not rigging. And miraculously it only benefited one party.
Replying to X
Saved ! Your comment will be displayed after the approval.
Error !
Error! Invalid Email.