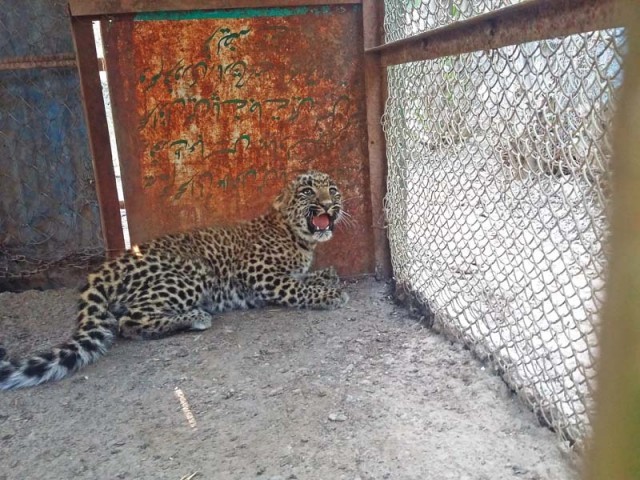 “She is healthy and has no injury marks on her body,” said an official.

Mansehra Sub Divisional Wildlife Officer Khursheed Abbasi said he received a tip about a leopard cub being poached by some villagers in the area of Gidarpur.

After receiving the tip, he led a raid Wednesday night in the forest range. Abbasi then received an anonymous phone call that the cub was fastened with a rope in the bushes near Forest Range Quarter. She was then rescued.

Locals said some unidentified people had poached the cub to sell or smuggle. However, the authorities got there in time to rescue the animal.

They say the cub might have got separated from her mother or siblings while searching for food near the village.

Abbasi said the Hazara division, especially Kaghan Valley and Galiyat, have over 40 pairs of leopards like these.

As part of legal action, he said a three-member enquiry committee had been constituted, which would submit its report on the incident within seven days.

Read: Biodiversity: ‘Renewable energy use can reduce exposure to leopards’

Earlier on August 22, 2013, some children from Dharmang Dhodiyal had also found a leopard cub of the same species and took it home.

Leopard sightings are a common in the area. They are considered a menace, in that the leopards attack farm animals from time to time.