Design­er feels honour has added to his respon­sibili­ty as an artist­
By News Desk
Published: July 1, 2015
Tweet Email 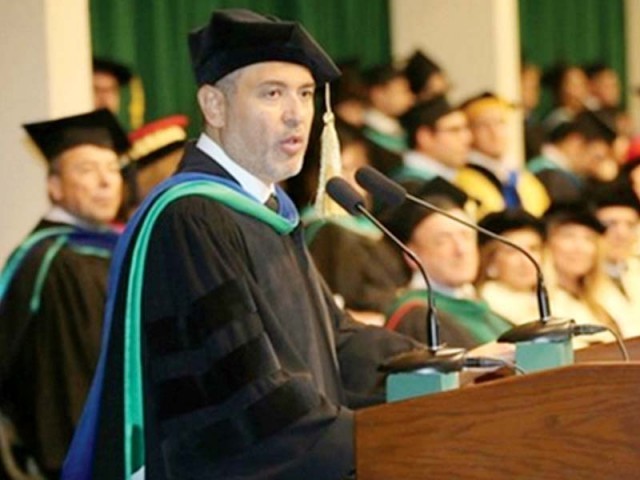 Elie Saab teamed up with the AUL in 2013 to offer Lebanon’s first fashion design degree. PHOTO: THE DAILY STAR

The Lebanese American University (AUL) awarded an honorary doctorate to the Lebanese fashion designer, Elie Saab, for his achievements on Monday, reported by Lebanon’s The Daily Star. In his acceptance speech during the ceremony, the renowned designer said, “When I started my career 33 years ago, I had a burst of energy and determination to succeed,” reported Lebanese media.

“What I’ve achieved today is a result of work and effort. But times have changed,” he added. He also highlighted the importance of education in career building, saying, “Nowadays your future lies in education, which will help you fulfill your dreams. Your degree is your key to the real world.”

Elli Saab first collaborated with the AUL in 2013 to make it the first university in Lebanon to offer an English-language bachelor’s degree in fashion design. “This honorary degree has increased my responsibility,” he said adding, “I thank [AUL President Joseph] Jabra for the trust he has put in me and I wish students all the luck and success.”

The designer also spoke about the political situation in Lebanon during his address. He highlighted will power and determination as the two factors seminal to a country’s progress.

Born in Lebanon in 1964, Saab is known for his red carpet grandeur. His creations have been red carpet regulars since 2002. It was back then when the designer rose to fame after dressing up Halle Berry for the Oscar’s ceremony. The Hollywood actor accepted her award donning a burgundy Elie Saab gown with a full skirt and see-through top. He has also been showcasing his couture collections in Paris for almost a decade.