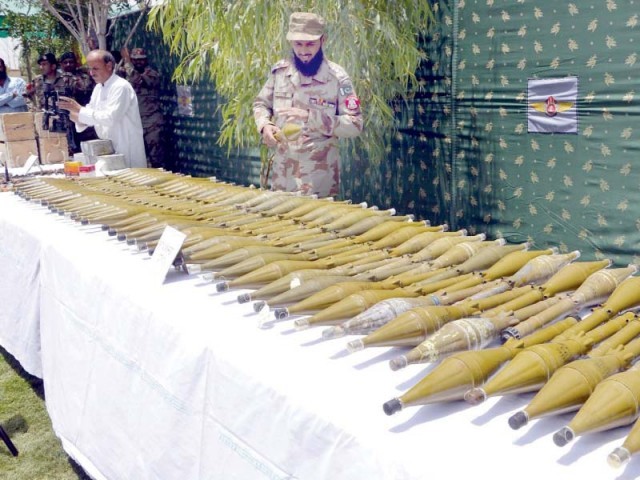 An FC official displays for the media the rockets seized in raids across Balochistan. PHOTO: INP

At least 13 suspected Baloch insurgents — including a brother and a nephew of a top commander — were killed in a search operation in the troubled Awaran district of Balochistan on Tuesday – the day which also saw bloody clashes between two insurgent groups in Dera Bugti district that left 27 fighters dead on both sides.

Acting on intelligence information about the presence of insurgents from the banned Baloch Liberation Front (BLF) in the volatile Mashkay area of Awaran, paramilitary troops, backed by air support, conducted the search operation early Tuesday morning, according to Frontier Corps spokesperson Khan Wasay

“At least 13 militants, including BLF chief Dr Allah Nazar Baloch’s brother Safar Khan, his nephew Shaek Baloch and his two commanders, Balaach and Shahjahan, were killed in the operation while some militants also sustained injuries,” Wasay said. He added that one paramilitary soldier was also killed and two injured in the gunfight with militants.

The FC official said the militants were involved in the June 6 killing of seven people in Mashkay. “They were also involved in the kidnapping of 17 women and 30 children, who were released in an earlier operation,” he added.

IGFC Maj Gen Sher Afgun praised his force on the successful targeted operation, which, he said, would help in restoring peace in the restive province. Mashkay, the hometown of Dr Allah Nazar Baloch, is considered as a BLF stronghold.

Elsewhere in the province, at least 27 insurgents were killed in overnight clashes between two outlawed Baloch groups on Tuesday. According to a source in the security forces, militants from the Baloch Liberation Army (BLA) attacked United Baloch Army’s (UBA) Karam Khan camp in the Peer Masori area. Later, another group jumped into the clashes that lasted some two hours.

Home Minister Mir Sarfraz Bugti confirmed 27 militants were killed in the bloody clashes. While addressing a news conference at the FC Madadghar Centre in Kohila Pahtak, Bugti also demanded the Muttahida Qaumi Movement (MQM) be declared a terrorist organisation after the BBC report claimed the party ‘received funding from the Indian government”.

“The MQM should be banned after a reliable [media organisation] provided evidence of its involvement in anti-state activities at the behest of the Indian spy agency [RAW],” he added.

Bugti went on to say that there were evidence of RAW’s involvement in Karachi. “The MQM is getting money from RAW which is clearly documented in the report and it should be taken seriously.”

Speaking about the operations of the security forces in the province, Bugti said successful operations have been carried out in Qilla Abdullah, Dera Murad Jamali, Bhag and Khanozai Pishin. He added that the people of Balochistan and their property would be protected at all costs. “Terrorism in Balochistan will be rooted out once and for all.”

Meanwhile, a remote-controlled bomb blast ripped through a convoy of the Frontier Works Organisation (FWO) in Turbat on Tuesday, injuring three soldiers.

According to the Balochistan Levies, suspected militants remotely detonated a device near Chogan Cross when FWO vehicles drove past. “As a result, one vehicle was damaged and three soldiers on board were wounded,” it added.