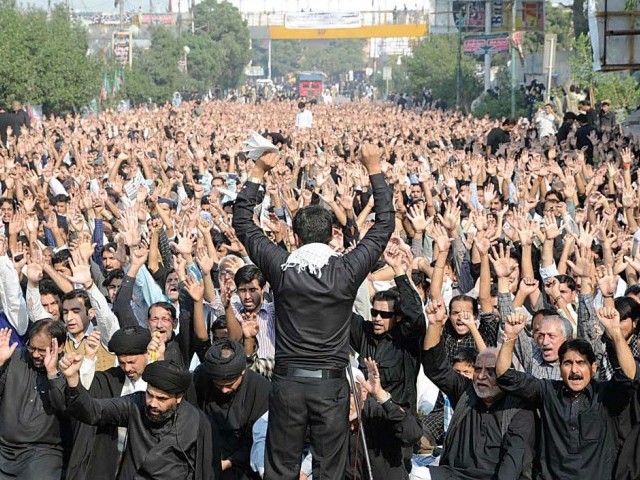 Others take Karbala as inspiration for courage and bravery.

KARACHI: Shia clerics chose the Muharram 9 sermons as an opportunity to comment on the blasphemy law, which they warned the government should not tamper with.

“Muslims in Pakistan will not accept any amendments to the blasphemy law,” said Maulana Shahanshah Hussain at one point. He condemned the attacks on mourners in Hangu and Orakzai and said that they were ready to sacrifice their lives for the supremacy of Islam and mourning of Imam Hussain (RA).

Earlier on, the mourners in the central congregation offered Zuhr prayers on MA Jinnah Road. They were led by Maulana Ahmed Iqbal Rizvi. After the prayers, the mourners staged a demonstration against what they said was the increasing interference of the United States government in Pakistan’s internal affairs.

Other Shia clerics who addressed mourners commented on the sacrifices of Imam Hussain (RA) to preach courage and bravery for Muslims. They believed that Karbala took Islamic Shariah to new heights. Scholar Maulana Syed Shahanshah Hussain also said that Karbala had become a source of guidance for all independence movements.

He believed that the sacrifices offered by Imam Hussain (RA) teach people how to tackle oppression, suppression and brutality.