Heatwave kills 90 in Karachi as residents grapple with power outages

Heatwave kills 90 in Karachi as residents grapple with power outages 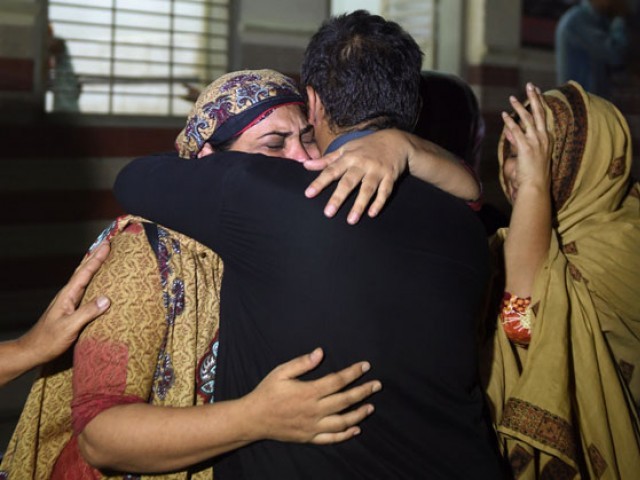 Relatives mourn the death of a heatwave victim at the EDHI morgue in Karachi on June 21, 2015. PHOTO AFP

KARACHI: A heatwave has killed at least 90 people in Karachi, officials said Sunday, as residents grapple with frequent power outages and water scarcity during Ramazan.

The city saw temperatures reach as high as 45 degrees Celsius (111 degrees Fahrenheit) on Saturday, just short of an all-time high in the metropolis of 47 C in June 1979.

Dozens were brought to private and public hospitals with complaints of dehydration and low blood pressure.

She said 20 persons died during treatment, adding that these people died due to heat stroke.

Another major facility, Abbasi Shaheed Hospital confirmed 20 people died due to heat stroke, including those who breathed their last on way to hospital.

Moreover, management of the Civil Hospital said, “Six persons were brought dead at hospital.” He added that all people died due to heat stroke.

Residents in Qayumabad converge at a water supply line to take some relief from the scorching heat. PHOTO PPI

According to sources, nine people died in parts of Lyari while at least two persons died in Keamari area.

Scores of people were referred to tertiary care hospitals from private hospitals. Most of them were brought to JPMC.

Pakistan’s Meteorological Department said temperatures would likely subside in the coming days, but doctors have advised avoiding exposure to the sun and wearing light cotton clothes.

The high temperatures were made worse by frequent power outages, sparking protests in several parts of the city of 20 million.

Prime Minister Nawaz Sharif has warned electric supply companies that he would not tolerate power outages during Ramazan, an official at the premier’s office said.

Karachi University in a statement said that it had postponed its exams for at least one month due to the extreme weather.

Get fit: Vehicle certificates mandatory but not available