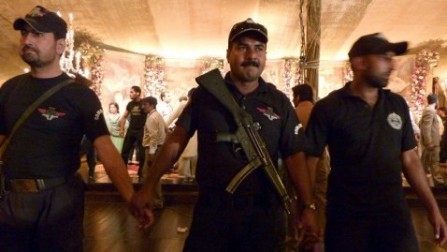 Police soldiers cordon off a stage where Indian tennis star Sania Mirza sit with her husband and cricketer Shoaib Malik during their wedding reception in Sialkot. (AFP)

SIALKOT: People of Sialkot hosted a magnificent reception on Sunday for the newly wed sports star – Shoaib Malikand Sania Mirza here at Sailkot hockey stadium but the even turned into a fiasco.

As the dinner started, some guests pushed around and misbehaved with Sania’s family members, who had come from India to attend the reception.

Some fancy crockery was also broken during the rumpus.

Sania Mirza’s father, who was looking quite perturbed, decided to leave the venue along with his other family members without having food.

Tension was also visible on Sania’s face. Reports said that the newly-weds hired security guards to prevent re-occurrence of such incident in the future.

As the couple arrived at the venue, people welcomed them with folk dances on drum beats and music. A large number of jubilant people danced. They also bought horses that danced on drum beats.

Two trucks of flowers were spent for decoration. On the occasion, the Sailkot police and law enforcement agencies provided full packed roof security.

Shoaib was wearing a white ‘sherwani’ while Sania Mirza was dressed in green and maroon Indian ‘sari.’ It was a unique event for the people of Sailkot who had been waiting for the arrival of cricketer Shoaib and tennis sensation Sania for the past several days.

Only people with special invitations were allowed to enter the venue, amid tight security. Different television channels reported that several relatives and friends of Shoaib remained unable to hand over gifts to newly married couple.

Many were desirous to shake hand with the couple and have a picture with them, but it could not happen due to security concerns