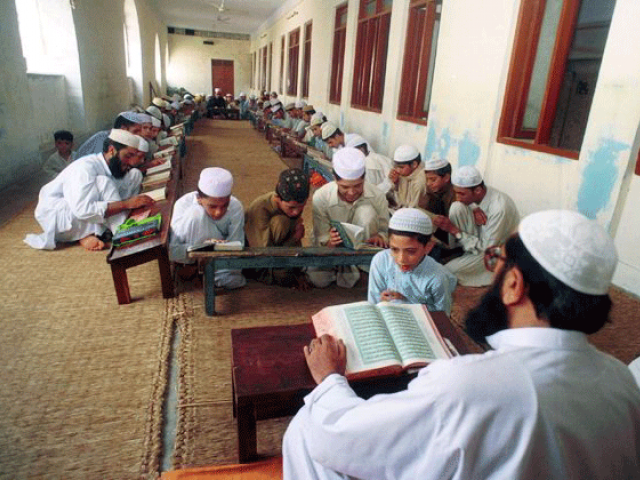 ISLAMABAD: Pakistan pledged to crack down on religious seminaries suspected of fostering extremism following the Peshawar school attack in December that left more than 130 children dead, but the move faces stiff resistance from conservatives.

Amid a wave of outrage after the attack at the school in the Peshawar, the government announced a “National Action Plan” to fight back against the militants.

A six-year moratorium on the death penalty was lifted and the constitution was amended to allow military courts to try those accused of carrying out attacks “in the name of religion or a sect”.

The plan also included proposals to keep a closer watch on the country’s 13,000 Islamic seminaries, or madrassas, 97 per cent of which are privately run.

With little oversight of what was being taught to the 1.8 children enrolled in them, fears grew after Peshawar that some were breeding grounds for intolerance — or even extremism.

Every evening the leafy streets of one of Islamabad’s most exclusive quarters throng with young men in white shalwar kameez and prayer caps.

They are students of the Jamia Faridia madrassa, tucked among the upmarket homes of diplomats and wealthy Pakistanis.

It is run by Maulana Abdul Aziz, the cleric of the hardline Red Mosque, which in 2007 was the scene of a week-long military siege against radicals which left more than 100 people dead and led to the rise of the Tehreek-e-Taliban Pakistan (TTP).

Aziz is well known for his controversial views, including praising the Islamic State group and saying the Pakistani military’s fight against the TTP was “un-Islamic”. Last year the Red Mosque’s madrassa for girls renamed its library in honour of slain al Qaeda chief Osama bin Laden.

Habib Ullah, a Jamia Faridia student, says bin Laden is his hero and has strong views on Shia Muslims, who form a minority of about 20 per cent of the Pakistani population, which is mostly Sunni Muslim.

“They are not Muslims and they should be converted to Islam,” the 12-year-old told AFP.

In his home village in the northern district of Kohistan, the cleric used to say that killing one Shia would bring you 70 steps closer to heaven.

That is a startling view for any child to hold, but particularly in a country where sectarian violence — mostly targeting Shias — is on the rise.

But the government’s efforts to rein in madrassas have prompted anger from many clerics, who accuse the authorities of maligning religious leaders in a bid to build an “anti-Islamic narrative”.

“The term religion and sect have been used in the… constitutional amendment, which makes it biased,” said Abdul Qudus, spokesperson for Wafaq-ul-Madaris al-Arabia, the country’s largest grouping of madrassas.

“We are quite sure that the government wants to target religious institutions, but we won’t let it happen,” he said.

Information Minister Pervez Rashid felt the force of the clerics’ influence last month after he called madrassas “universities of illiteracy and ignorance”.

Banners appeared overnight all over Islamabad condemning him and he was forced to apologise on television.

There is also the question of possible resistance from Pakistan’s wealthy friends in the Gulf. In January, a Senate committee heard that seminaries were receiving funding from Middle Eastern countries including Saudi Arabia, Kuwait and Qatar.

The last time Pakistan tried to regulate madrassas, under military ruler Pervez Musharraf, Gulf countries — particularly Saudi Arabia — leaned on Islamabad to persuade it not to push too hard on the curriculum, according to a senior official.

After Peshawar, however, Pakistani media and government ministers began publicly questioning whether financial support from Saudi Arabia for madrassas was fuelling violent extremism, a rare moment of discord between the longstanding allies.

The Saudi embassy issued a statement saying all its donations to seminaries had government clearance, but much of the funding is thought to come through informal channels.

“Madrassas have special representatives who travel across the Arab world and African countries… and those who have access to Europe, they collect the money themselves from Muslim communities there,” Amir Rana, the director of think tank the Pakistan Institute for Peace Studies, told AFP.

“This is a grey area which is difficult to monitor.”

A senior government official who asked not be named said an estimated 70 million rupees was illegally transferred from two Gulf countries in the space of two months this year after visits by religious leaders.

Pakistan is a deeply religious society and, despite misgivings about madrassas, clergy are generally well respected.

Overcoming resistance from them will take political will and determination, which Rana said he doubts the government can muster.

“They (the government) have political interests and they are well aware of the street power of the clergy and their hold on society,” he said.

Pakistan underwent a “programme of Islamisation” under military ruler Zia-ul-Haq in the 1980s and successive governments have sought to make capital from religion.

The government has sought help from religious leaders to persuade parents to immunise children against polio and used mosques and seminaries to build a narrative of patriotism.

Moreover, madrassas remain popular with the poor for financial and social reasons, as well as religion.

For many less well-off families, madrassas offer a cheap way to deal with their numerous children. Unlike many schools, madrassas do not charge fees, and on top of teaching pupils, they also house, clothe and feed them.

In addition, a madrassa education can offer social prestige that in Pakistan’s deeply religious society, secular schooling cannot match.
A boy from a poor family who trains long enough to become a mullah brings respect for his whole family — and the chance to open his own mosque.