Billbo­ards pop up in Hyderi and the Expres­sway, Karsaz next.
By Saba Imtiaz
Published: December 16, 2010
Tweet Email 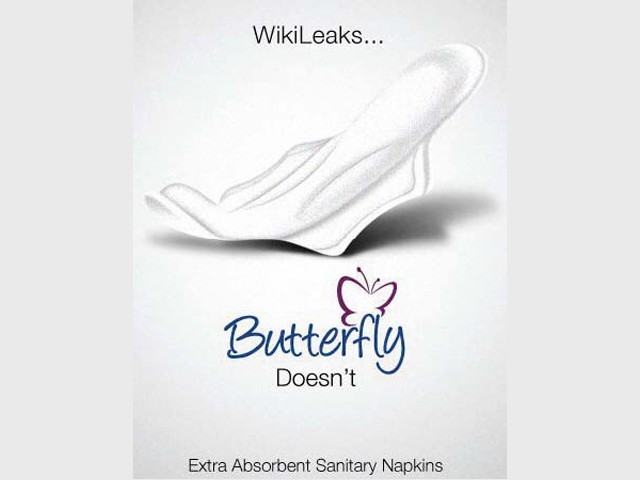 The ad agency behind the work, RG Blue, says it has received a good response so far. PHOTO: COURTESY RG BLUE

KARACHI: Advertisements for sanitary pads are known for a lot of things — including elaborate phrases about wings, comfort and wearing white clothes without looking over your shoulder — but rarely for a sense of humour.

That changed this week, when residents of Karachi started hearing about a billboard for the Butterfly brand with the tongue-in-cheek slogan: ‘WikiLeaks… Butterfly doesn’t’.

A photograph of the billboard has gone viral on the internet and has been posted by numerous people on Facebook, Twitter and blogs.

The whistleblower website WikiLeaks’ release of thousands of confidential US embassy documents have made it a household name worldwide but this may be the first time it has been ‘literally’ referenced in an advertisement.

The agency behind the campaign, RG Blue Communications, says that it has “received a very good response” to the billboards. Amjad Hussain, the head of business development, laughingly told The Express Tribune, “Nobody has said it’s in bad taste yet!”

According to Hussain, Butterfly was a new client that had recently come on board. They loved the idea when it was pitched to them and so the campaign rolled out very quickly.

Munir Bhatti, the agency’s art director, says he has been inundated with phone calls about the ad. “I could have also shown a girl like other ads have. But the idea was to make it very different and to use the word WikiLeaks — and that’s what this is.”

Hussain says it has only been a couple of days since the billboards went up and the print campaign is set to roll out soon. “There are a couple of billboards; one is near the Expressway and the other is in Hyderi. There will be one in Karsaz next week.” So far the campaign is limited to Karachi.

Political messaging or references to news topics may not be a part of most advertising campaigns, but an exception has been the billboards for the Nando’s chain of restaurants in Karachi. Residents have discussed, photographed and blogged about their ads, which have poked fun at everything from the Clifton underpass being flooded during the 2006 rains (Why didn’t the chicken take the underpass? It couldn’t swim like a duck!), President Zardari’s infamous meeting with Sarah Palin (What did the Peri-sident say to the Peri Peri chick? You’re gorgeous! Can I hug you?) and Shoaib Malik’s marriage to Sania Mirza (Shoaib, why go to your neighbours when you can get hot chicks at Nando’s).

According to Saima Zaidi, whose book Mazaar, Bazaar: Design and Visual Culture in Pakistan looks at the evolution of advertising over the decades, “Advertising may not only be about ‘manufacturing’ a desire but also about giving it visibility. The more access to information we have, the more it is going to play into advertising.  When it comes to current affairs in advertising, at the end of the day it is about striking a chord — which is not a novel concept in itself!”