Either my way or the highway: Tripartite alliance opts out of govt APC today

Either my way or the highway: Tripartite alliance opts out of govt APC today 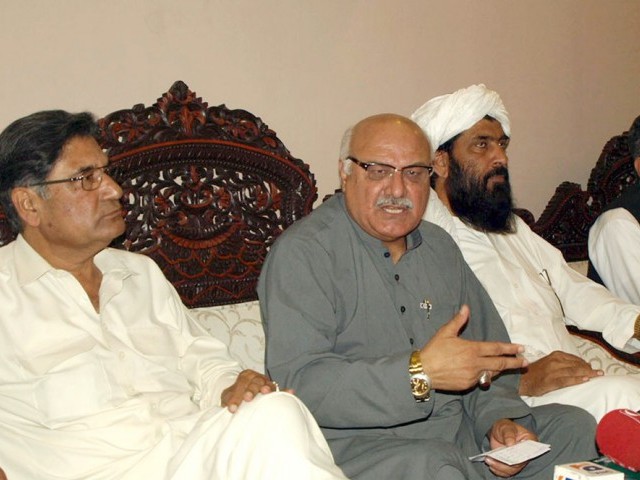 The week began with the government trying to lure the opposition to the all parties conference (APC) (scheduled for Tuesday) but facing a curt response from the tripartite alliance; a harbinger of ‘eventful’ days ahead. The conference will be held at the Chief Minister House, with the aim to resolve issues which spun out from local government polls which were held on May 30 amidst violence and allegations of rigging.

The tripartite alliance of the province’s opposition parties has turned its back on the offer and announced it will go ahead with its June 10 protest plans, indicating  confrontation is imminent.

Addressing a press conference at the CM Secretariat on Monday, Minister for Public Health Engineering Shah Farman invited all political parties to table their reservations regarding polls at the APC.

“Pakistan Tehreek-e-Insaf is willing to go all out to ensure all stakeholders are satisfied,” he said. The party has no qualms considering any option, including re-polling and investigation, added Farman.

Responding to demands for CM Pervez Khattak’s resignation, Farman conditioned the move with the federal government’s dismissal. “If the federal government calls quits, we will waste no time in dissolving the provincial legislature,” he maintained. The minister said those crying foul over LG polls also admitted to irregularities in the 2013 general elections.

“Those who do not turn up at the APC will have to explain why they refused. It will indicate they have blood on their own hands.”

Farman said the tripartite alliance has the right to hold peaceful protests and the government will not obstruct the demonstration in any way. “We want re-elections under the supervision of the judiciary and security forces.”

A sit-in for sacking

Farman’s presser—largely seen as a damage control measure—failed to impress the rival camp where preparations are under way for a show of muscle on June 10. Flanked by PPP leader Najamuddin Khan and JUI -F leader Jaleel Jan, Awami National Party General Secretary Mian Iftikhar Hussain rejected the government’s offer to participate in the huddle.

Addressing a press conference at Bacha Khan Markaz later in the afternoon, Mian Iftikhar said the CM’s resignation and the dissolution of K-P Assembly were the only way forward. “We are contacting all political parties to join hands with us,” he said. Mian Iftikhar said, “Impartial elections are not possible as long as they [the PTI] are in office. The APC is being held only to save the Khattak administration which will have to quit,” he said.

The ANP leader said protesters will not create problems for the general public and the demonstrations will remain organised and peaceful.

Meanwhile trader unions, led by Aleem Jan and Sharafat Ali, have announced to support the June 10 strike in Peshawar.

Apart from PTI’s coalition partners, the APC will also be attended by QWP. Party Spokesperson Tariq Khan said a consensus over the issue is the need of the hour. On the other hand, PML-N has decided to remain aloof. Talking to The Express Tribune, PML-N K-P General Secretary Rehmat Salam Khattak said PTI is responsible for the crisis and is still “doctoring results”. “This is the reason why complete results have not been announced as yet,” he maintained.