They say 'If Erdoga­n gets what he wants on Sunday he will be unstop­pable'
By Reuters
Published: June 7, 2015
Tweet Email 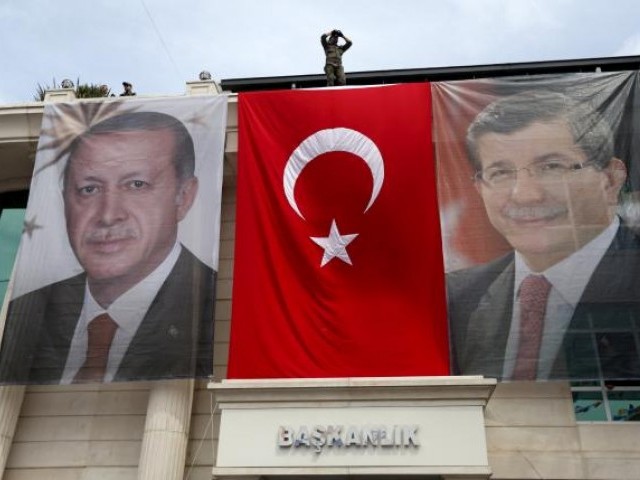 A special forces police officer takes security measures as he stands on top of a building where the portraits of Turkey's President Tayyip Erdogan (L), Prime Minister Ahmet Davutoglu and a Turkish flag are displayed in Istanbul. PHOTO: REUTERS

ISTANBUL: Turks began voting on Sunday in the closest parliamentary election in more than a decade, one that could pave the way for President Tayyip Erdogan to amass greater power or end 12 years of single-party rule for the AK Party he founded.

A deadly bombing in the mainly Kurdish southeast on Friday has magnified attention on the pro-Kurdish opposition, which is trying to enter parliament as a party for the first time. Efforts to end a three-decade Kurdish insurgency as well as Erdogan’s political ambitions could hinge on that party’s fate.

Turkey’s most popular yet most divisive politician, Erdogan seeks a large majority for the ruling AK Party to boost his powers. He says a U.S.-style executive presidency is necessary to bolster the regional influence and economic advances of NATO-member Turkey.

“They say ‘If Erdogan gets what he wants on Sunday he will be unstoppable’,” he told a rally in the northeastern province of Ardahan on Saturday.

“They actually mean Turkey will be unstoppable.”

In power since 2002, the AKP is expected to again be the largest party by far. But achieving a majority may depend on the pro-Kurdish Peoples’ Democratic Party (HDP) falling below the 10 percent hurdle required to enter parliament. Opinion polls put it around that level.

“I am certain the HDP will exceed the threshold. My only worry is the theft of votes,” said Bahar Haram, a 25-year-old social services worker voting in Diyarbakir, the biggest city in the mainly Kurdish southeast, where the HDP draws most of its support.

Like many in the region, her priority was an end to the conflict between Ankara and the militant Kurdistan Workers Party (PKK), which took up arms in 1984 in an insurgency that has killed 40,000 people.

“We want peace, that’s all we want. We want this horrible war and fighting to come to an end.”

Jailed PKK leader Abdullah Ocalan and the state launched peace talks more than two years ago and advancing the process could hinge on the outcome of the election.

Polling stations will close at 1400 GMT (10 a.m. EDT). The first results are set to be announced at 1800 GMT although authorities could lift a reporting ban before then.

While constitutionally required to stay above party politics, Erdogan has held frequent rallies during what has been a confrontational election campaign, joining Prime Minister Ahmet Davutoglu in attacking opposition parties.

The two have portrayed the election as a choice between a “new Turkey” or a return to a history marked by short-lived coalition governments, economic instability and military coups.

“Either the stability of the last 12 years will continue, or there will be the crisis scenario of those who want to take Turkey back to the chaos and crisis atmosphere of the 1990s,” Davutoglu told a rally in the southern city of Antalya.

It is a message which resonates with religiously conservative voters in Turkey’s Anatolian heartland, including the city of Konya, an AKP stronghold where Davutoglu was set to vote.

“I voted for the AK Party and for Davutoglu. He’s an honest man, a good Muslim, he prays five times a day, and he’s from Konya like us,” 59-year-old Ekrem Bal, twirling prayer beads outside a polling station, said.

Ratcheting up tension ahead of the vote, HDP leader Selahattin Demirtas called for Erdogan to apologize for his muted response to Friday’s bombing of an HDP rally in Diyarbakir, which killed two and wounded more than 200.

Security was tightened after the attack and some 9,000 police and gendarmerie officers were assigned for duty in Diyarbakir on Sunday.

Erdogan late on Friday expressed his condolences for victims of the attack, calling it a “provocation”.

While he says he is equally distant from all parties, HDP leaders have accused Erdogan of whipping up sentiment against them and party deputy Idris Baluken said he and the AKP bore responsibility for Friday’s attack.

“The source of the violence is the AKP, the president. For two months, we have been warning that the rhetoric would result in just this, including in our talks with the government,” Baluken told Reuters.