Defence spending goes up to Rs781 billion after 11% hike

Defence spending goes up to Rs781 billion after 11% hike 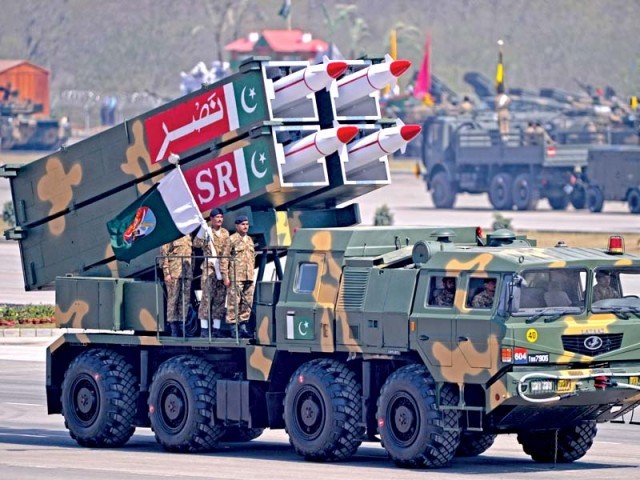 Pakistan announced on Friday an 11% hike in defence spending for the fiscal year starting July 1 keeping in view its ongoing fight against terrorism and the hostile stance adopted by arch nemesis India.

The defence budget has been jacked up to Rs781.2 billion for the fiscal 2015-16 – an increase of Rs81 billion from the Rs700.2 billion allocated in the outgoing financial year. The actual increase in defence expenditure is about 8% or Rs63 billion when compared to the revised figures of Rs720 billion for 2014-15.

While the budget document presented in parliament did not give a force-specific break-up, defence ministry officials said the Pakistan Army would get 47% of the total outlay while 20% would go to the air force and 10% to the navy.

Out of the total Rs781.2 billion, Rs326 billion has been set aside for employee-related expenses, Rs200.6 billion as operating expenses and Rs169.6 billion has been earmarked for physical assets. However, these figures do not include the Rs174 billion allocated in the national budget for pensions of retired military personnel and another separate portion for security-related expenses.

In addition to this, the military will also get Rs180 billion under the contingent liability head and Rs92 billion out of the Rs154 billion reserved under the Coalition Support Fund that Pakistan gets from the United States for its counterterrorism efforts.

‘Lowest’ in the region

Pakistan raises its defence spending every year because of its historically uneasy relations with India, which earlier this year also boosted its annual military spending by 11%.

Military officials defended the latest increase insisting that Pakistan military’s expanses were the lowest in the region given the volatile security environment.

A defence ministry source explained that Rs781.2 billion set aside in the national budget for the military was reserved for all the armed forces, including strategic forces and civil armed forces.

“The army’s share comes to only about 7.9% (Rs371 billion) from the total national budget outlay,” he said, claiming that despite the ongoing war against insurgents, Pakistan’s defence budget had actually declined in terms of expansion of the national budget.

Last year, the Pakistan Army was allocated Rs 331.412 billion and about 94% of it was spent on non-development expenses like salaries and allowances. Only 6% or Rs19.88 billion were left for the development sector.