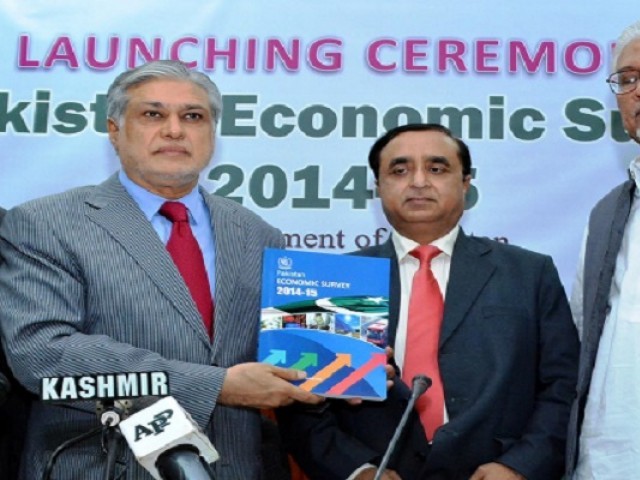 The news from the launch of the 2015 Economic Survey of Pakistan on Thursday was broadly mixed. Most economic indicators improved compared to the same period last year, but the government missed its growth targets, suggesting that while the economy has stabilised, it has yet to enter a growth phase.

The gross domestic product, the total size of the economy, grew by 4.24% in real terms, said the finance minister. The number is short of the government’s target of 5.1% growth for fiscal 2015. In June last year, Dar had promised to enhance the economic growth rate by 1% each year. But the growth rate was only 0.2% up from fiscal 2014’s revised figure of 4%.

“It is evident that the 5.1% economic growth rate target could not be achieved due to massive floods in September 2014, economic disruption due to agitation and dharna (August to December 2014) and massive declines in international commodity prices,” said Dar, blaming externalities for the slower growth. “The 4.2% growth rate is the highest in seven years.”

Not once did Dar mention the impact of his government’s failure in introducing governance, energy and taxation reforms that the independent economists say are the biggest reasons for subdued economic growth after the country’s security situation.

Unlike previous news conferences, which were characterised by bravado and ambition, this time Dar appeared a little more realistic and guarded in his statements. He was cautious while commenting about his government’s performance in two critical areas – the budget deficit target and the tax-to-GDP ratio. He said the budget deficit may exceed 5% of GDP, which is higher than the International Monetary Fund’s target of 4.9% of GDP.

Dar said his government’s promise to increase the overall growth rate to 7% by fiscal 2018 was still intact. However, he lowered the target of increasing tax-to-GDP ratio to 13% by 2018 – a full 2% of GDP less than the one promised by the Nawaz administration in 2013.

The Federal Board of Revenue (FBR) remains an area of concern for the government for it miserably failed to achieve Rs2,810 billion tax target for the outgoing fiscal year. The FBR would achieve the downward revised tax target of Rs2,605 billion, claimed Dar.

On Thursday, Prime Minister Nawaz Sharif appointed former senator Haroon Akhtar Khan as his special assistant on revenue with the status of a minister of state. Haroon Akhtar is the younger brother of former commerce minister Humayun Akhtar Khan and is an actuary by profession.

Commenting on the missed targets, Dar said his government had stretched the targets in the first place to make sure all stakeholders give their 100% to improve the economy.

Perhaps the most controversial bit of Dar’s news conference was the unemployment rate, which the Economic Survey claims was 6.0% during fiscal 2014. However, the planning ministry on Monday told the National Economic Council that the unemployment rate was 8.3%, a number that Prime Minister Nawaz Sharif approved as the basis of economic planning.

The Economic Survey’s claim is also undercut by the underperformance of the agriculture and manufacturing sectors – both of which are labour-intensive. The Planning Commission reported to NEC that 800,000 more people remained jobless in outgoing fiscal year due to low pace of growth. This also resulted in an increase in poverty, although the average per capita income increased by nearly 10% to $1,513. The one target the government did manage to achieve was containing inflation below 5%, though this was largely due to lower global oil prices, which has little to do with government policy. That, however, did not keep the finance minister from trying to claim credit for it.

Dar credited the appreciation of the rupee against the US dollar, better foreign currency reserves, reduced government borrowing from the State Bank of Pakistan, effective monetary policy and smooth commodity supply as the reasons behind low inflation and why he believed that inflation will be contained further.

The 3.3% agricultural growth target was missed as the sector grew by 2.9%. The production targets of important crops, other crops, livestock and forestry were missed. The only targets achieved were those of cotton ginning and fishery. The production of wheat, sugarcane and maize decreased compared to last year.

The industrial sector grew by only 3.6%, compared to the government’s growth target of 6.8%, indicating that the manufacturing sector was not picking up due to power outages and a lack of credit.

Dar said the current account deficit – a measure of how much outflows exceed inflows – during the first ten months of fiscal 2015 was $1.36 billion. Foreign investments during that time was $2.6 billion, including $1 billion raised by the government through issuing Eurobonds, lower than the previous fiscal year. Exports dropped 3% while imports dropped only 1.6% during that time.