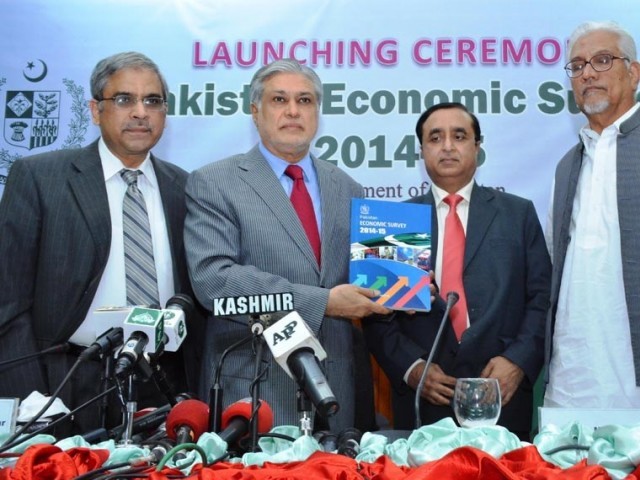 ISLAMABAD: A day before announcing the budget for fiscal year 2015-16, the government reflected upon what it achieved during the last 12 months.

Unveiling the Economic Survey 2014-15, Finance Minister Ishaq Dar  highlighted the missed targets of the government during the outgoing fiscal year that started on July 1, 2014 and will end on June 30, 2015.

“According to provisional estimates the GDP growth during 2014-15 remained at 4.24 per cent,” the minister, reading the survey, said at a televised press conference.

The government missed the most important economic target – GDP growth – and hence, it was less surprising that other goals were missed as well. Failing to take full advantage of the fall in global crude prices and riding on loans and grants, the country was able to shore up its foreign currency reserves. However, the industrial sector, particularly the large-scale manufacturing sector, missed its target.

“The main contributing factors of this rapid increase in per capita income include acceleration in real GDP growth, relatively lower growth in population and the consistent Pakistani rupee,” Dar said.

Out of 23 key growth indicators, five hit the government’s targeted growth rates while 18 indicators, primarily in agriculture and industrial sectors, remained below expectations.

The inflation rate measured by the changes in CPI, averaged at 4.8% during July-April, 2014-15 against 8.7% in the comparable period last year, which is lowest since 2003. Industrial sector recorded growth at 3.62% as compared to 4.45% last year.

The target for the industrial sector was set at 6.8%. “The agriculture growth stood at 2.9% during July-March 2014-15 as compared to 2.7% during the last year,” the finance minister added. While unveiling the Economic Survey, Finance Minister Ishaq Dar said, “Global economic growth during the outgoing year has witnessed some continuing signs of improvement with a pick-up in high-income economies along with some improvement in developing countries.”

“Pakistan is improving quantitatively and qualitatively as growth achieved 4.24% is broad based and is the highest achievement since 2008-2009,” Dar said. Losses due to war on terror down by a third

Though the total economic loss sustained by Pakistan due to War on Terrorism since 9/11 rose to $107 billion, the yearly losses from terrorism declined by a third to $4.5 billion in the outgoing fiscal year, in part due to a military offensive against militants in the tribal areas and the Karachi operation.

With all the talk about increasing the tax collection, the country still suffered Rs665 billion revenue loss in the outgoing fiscal year because of tax exemptions, an amount which was 39% more than the previous year, despite withdrawal of Rs103 billion worth of tax relief in the previous budget. Only 473 megawatts added to the grid

While factories and CNG stations suffer forced shutdowns due to gas shortage, protests against power outages continue to occupy police in metropolitans. Even still, the government does not seem to have any remedy for at least the next two years.

Pakistan spent 44.5% of its total revenue to service debt payments in nine months till March 2015 compared to 47% spent during the same period of previous year, the Economic Survey 2014-15 said.

The appetite of the country’s private sector for credit remained subdued for the most part of the outgoing fiscal year relative to 2013-14, according to the Economic Survey of Pakistan.

Wiki Loves Earth: 10 photographs from Pakistan that will leave you breathless