Metro Bus project: This is the dawn of a new era, says PM Nawaz

Metro Bus project: This is the dawn of a new era, says PM Nawaz 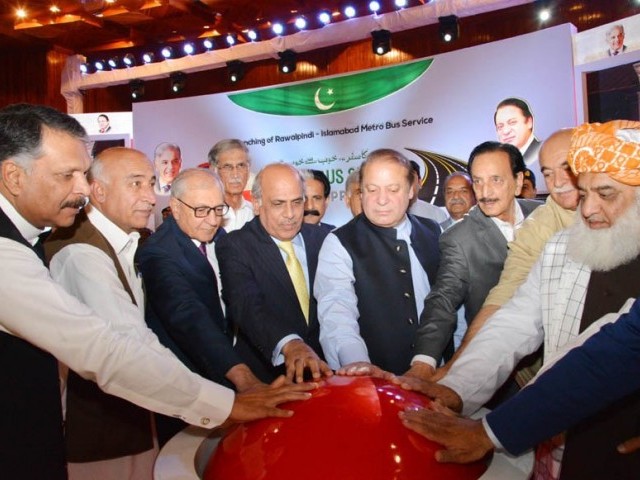 ISLAMABAD: Prime Minister Nawaz Sharif while inaugurating the new half a billion dollar Islamabad-Rawalpindi Metro Bus service on Thursday said the iconic project is a symbol of changing Pakistan.

“This is Pakistan, a changing Pakistan,” said the prime minister while addressing at the Convention Centre in Islamabad. “It is the dawn of a new era.”

He said in the past developmental projects took decades to complete and their cost escalated many times but this culture has now come to an end.

He congratulated people of Rawalpindi and Islamabad and said the bus service would provide them modern and comfortable travelling facility at an affordable cost.

“They would now be able to reach their work places and educational institutions speedily and without wastage of time,” he said.

He also praised the Punjab chief minister for implementing the project in the shortest possible time and in a transparent manner.

The prime minister also announced a motorway from Khunjerab to Gwadar will be constructed, passing Khyber-Pakhtunkhwa and Balochistan.

“After national consensus, the government has earmarked Rs30 billion in the new budget for the Western route of the CPEC,” he said.

The prime minister appreciated all those who contributed to implementation of the Rawalpindi-Islamabad Metro Bus project and announced prizes for them.

Meanwhile, Nawaz also announced the Metro Bus project in Karachi, among a number of developmental projects.

Shahbaz also spoke and said the project should be called the “Pakistan Metro Bus” as people and communities from regions across Pakistan lived in the twin cities.

The government hopes the project will revolutionise transport in the capital but it has been criticised by some as extravagant.

The 23-kilometre line, where 68 air-conditioned buses will carry an estimated 135,000 passengers a day along exclusive, signal-free lanes, links the neat, leafy capital with its sprawling twin city Rawalpindi. The project was built in 13 months — six months longer than planned — at a cost of Rs44.84 billion and will use buses from Turkey.

Critics have branded the metro bus, which is opening as the economy slowly rebuilds after years of stagnation, as “wasteful”, saying priority should be given to spending on education, health and the environment.

But the government hopes it will give the economies of the twin cities a boost by making travel easier and cheaper for commuters currently reliant on a patchy network of minibuses and vans. Punjab Chief Minister Shahbaz Sharif said the service would be a boon for people on low-incomes.

“It will also help cool the anger of people who have to travel in shoddy vans while government officials, politicians and rich people drive past in their air-conditioned and bullet-proof vehicles,” Shahbaz told journalists earlier this week.

With gleaming grey tiles, escalators, elevators and modern glass and steel structures with wavy red roofs, the 24 stations of the new line would not look out of place in a more developed country. Completion of the project will be welcomed by many if only as heralding the end of more than a year of major construction work.

Since the ground-breaking in February last year, large sections of key roads have been dug up, causing huge traffic snarl-ups — to add to the noise and dust of the building work. “They dug up the entire route at once without any planning to divert traffic,” said office assistant Ishtiaq Ahmed, who travels daily from Rawalpindi to Islamabad by car.

“The daily commute time has increased by one hour at least because the construction has caused congestion on all roads and I’ve had several warnings from my boss for turning up late,” Ahmed told AFP. Work was scheduled to be completed by December, but was repeatedly delayed, notably by months of political protests in the capital last summer over alleged election fraud.

Civic rights activist Zafarullah Khan said the project was imposed on the people and no public hearing and environmental impact assessments were carried out before its start.

“It is an artificial transplant in the chaotic development model of Islamabad. Who decided? The citizens of the capital were not consulted,” Khan told AFP. He said the “only benefit” would be that for Rs20 people can enjoy a ride in an air-conditioned bus in the height of summer.

Islamabad was designed in the 1960s on a grid pattern and some have slammed the metro bus as the latest act of vandalism on the original plan.

They say the new bus route spoils the grandeur of the central Jinnah Avenue, the broad boulevard which runs from Parliament House to the far end of the the capital.

It is the second metro bus scheme in Pakistan, after the one that opened under Shahbaz Sharif’s guidance in Lahore in 2013.

As in Islamabad, that met with scepticism initially but has proved popular, currently ferrying up to 12,000 passengers an hour along its 29-kilometre length. Officials say a mass transit system is indispensable for any city the size of Islamabad-Rawalpindi, and the existing set-up had made commuting an agonising experiencing for people, particularly women and the elderly.

Private mini-vans, many rickety and unroadworthy, are often dangerously overloaded, with men, women, children and students stuffed in cramped spaces like livestock.

“The metrobus will be a great boon for commuters as currently they have to travel in small over-crowded vans and dilapidated mini-buses,” office worker Aurangzeb Khan told AFP.

“It’s quite a struggle everyday to catch a van and then be huddled into it like chickens.”

Women and the elderly are pushed and harassed during travel, he said, hoping the metro bus might bring a measure of dignity to the daily commute.