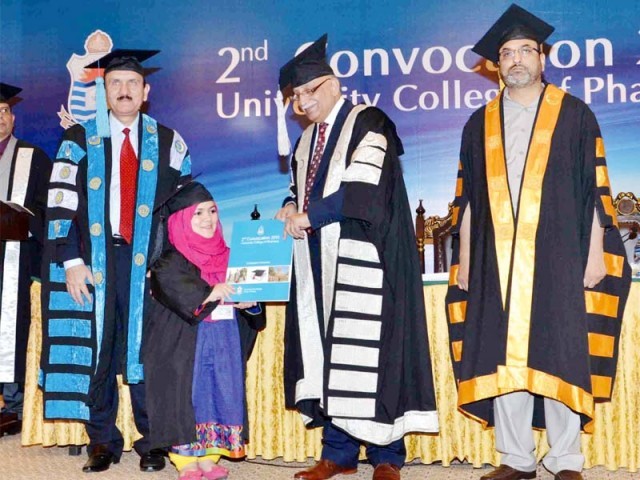 A student receiving her degree at the University College of Pharmacy’s convocation. PHOTO: WASEEM NIAZ/EXPRESS

LAHORE: One hundred and thirty-eight students were conferred degrees on Wednesday during the second convocation of the University College of Pharmacy.

Ajay Ram Jayswal Kalkar, a student from Nepal, secured the first position in Pharm D and was awarded the gold medal.

Kamran said that no valuable contribution towards the creation of new knowledge was being made in the Muslim world. “Over the past few centuries, Muslims have made no progress in terms of knowledge. This is a clear violation of teachings of the Holy Quran,” he said.

He said that there about 250 legislative verses in the Holy Quran. “The number of verses directing people to ponder over the nature of things is around 750. This reflects the importance of knowledge in Islam. The Muslims are facing problems because they have deviated from the teachings of the Holy Book. Pursuit of knowledge is the only way to weed out terrorism and illiteracy. Knowledge is the source of power and respect. No nation can survive without promotion of education,” he said.

He said that the United States’ total GDP was $17 trillion. “It spends between 2 per cent and 3 per cent of its GDP, around to $340 billion to $510 billion, on research and development per annum. Pakistan has a GDP of around $225 billion. It is spending only around 0.2 per cent on research and development per year. Pakistan is spending only 2 per cent of its GDP on education. The average spending on education by countries in the world is 5 per cent,” he said.