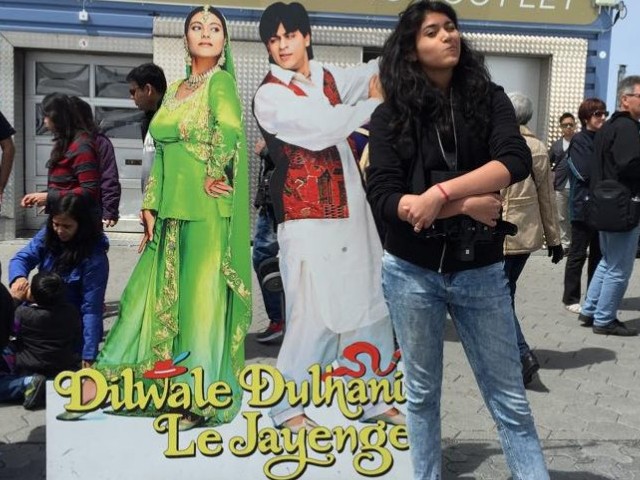 KARACHI: A group of young filmmakers is working on paying the ultimate tribute to iconic Bollywood film Dilwale Dulhania Le Jayenge, and it is nothing short of a remarkable treat for fans of Hindi cinema’s longest running movie.

Meet Natashja Rathore. A student at The London Film School, Natashja is the director of a unique documentary on Dilwale, which attempts to trace the footsteps of Raj and Simran. What started as a college assignment for Natashja and her team, comprising students from various nationalities (she is Indian, her producer is Pakistani and her sound recordist is Russian), has quickly turned into a global movement of sorts as fans from all corners of the world started pledging their support.

“I knew I wanted to do a documentary as my graduation film. Honestly speaking, I had many subjects in mind but since this is the first project of my career, I knew it had to be a subject that I am not only passionate about but something that would enable me to start my career with a bang,” Natashja told The Express Tribune.

When asked why she chose to base her college project on Dilwale and not any other film, Natashja says it was “quite magical” how that happened. “I was in Mumbai in December 2014 and was hanging around waiting for some cosmic sign to fall out of the sky. It was Christmas day and I was watching a repeat telecast of Comedy Nights with Kapil (a popular Indian TV show) – the DDLJ 1,000 weeks episode. I didn’t think of it then – it was only when I was going out for dinner with my family that the idea came to me. I mentioned it and my whole family got excited but we forgot about it during dinner. When we got back into the car, the radio – which had been dead for an entire year – started automatically and it started playing Mere Khwabon Mein – it was freaky! We drove 200m and we saw a big poster of DDLJ. That’s when I knew – this was it!”

Although it started off as a college project, the Dilwale documentary has managed to gather a large following on Twitter and Facebook thanks to behind-the-scenes footage, which went viral after Natashja shared it on social media.

Natashja revealed that despite not knowing anyone in Bollywood, she managed to secure the rights from the makers of Dilwale i.e. Yash Raj Films (YRF). “I was leaving for London in five days. I knew I had to get in touch with YRF to obtain the rights but I didn’t know how to go about it. Writing to the general company email address is always dodgy; things tend to be overlooked. So I knew I had to find a way to track down the man himself – Aditya Chopra.” “I used my brain and just a little bit of common sense to crack his email address and wrote to him. Two days later, I got an e mail from the company calling me for a meeting to Yash Raj Studios.”

She said that the project is backed by YRF in the sense that they have given her team complete rights and access to their archives. The production house has been helpful in getting her in touch with whomever she needs to for interviews. Additionally, they have also provided her team with official merchandise for their crowdfunding campaign. “Money is the only thing that we’re not getting but it is okay – we can live on love,” she added.

The documentary is being made as a feature length film for the big screen. “I like pretty pictures. I like good lighting. I like good compositions and I like to see it on a big screen! So ‘cinematic’ and ‘dramatic’ are the two words that I use and my crew often teases me.”

From the engine of the Yash Chopra train. pic.twitter.com/KDi2GSRgrJ

According to Natashja, the documentary, in a way, investigates all the aspects that made Dilwale the successful film that it is today. “It’s not my interpretation. I personally dislike documentaries that impose the view of the film-maker. The idea is to be objective and that’s what we are as a team. We come from so many different countries and we have various opinions but ultimately, we want to make something that presents the truth and then let the audience make whatever they want of it.” She is hopeful that the documentary will be completed by Dilwale’s 20th anniversary, which falls on October 20, 2015. “But taking into account our current lack of funds, there may be some delays. I was supposed to be done with filming the London schedule by June 9 and leave for India by the 12th but, unfortunately, I have had to extend my stay until the 30th since it is very difficult to get filming permissions in London; and even if you do, it is heavily expensive and we don’t have any money left after our Switzerland shoot.”

Up close and personal with the Yash Chopra Train! #TheDDLJDoc pic.twitter.com/6l1tyt8RhO

Even with delays, this film needs to be ready by mid-November at the latest as that is the deadline of their college project. “That’s the advantage of doing it as a graduation project. You’re forced to complete it at any cost,” she said.

As for the release, Natashja says she plans to follow The London Film School tradition and have the film premiered at major festivals. “However, the commercial release depends on YRF because they hold the rights to distribution. So, if you want the movie to hit the cinemas, I’m afraid you’re going to have to ask Yash Raj.”

Getting ready to film the Yash Chopra Suite at The Victoria Jungfrau Grand Hotel in #Interlaken pic.twitter.com/xQWoHnB8cs

Natashja seems really happy with her crew. Talking about her producer Hinnaa Sulahria, she said, “She was born and brought up in Las Vegas but her roots are in Pakistan. She lived a stone’s throw away from Hollywood so she had a majority of her training back there. Hinnaa is also a student at The London Film School and she came on board particularly because of her passion for Bollywood and the subject. Her life’s ambition is to get down on her knees and ask Shah Rukh Khan to marry her. What can be better than a wonderful little India-Pakistan collaboration on a student film; it’s ideal, no?” For the love of @iamsrk please guys – DONATE to @TheDDLJDoc ! Follow the link : http://t.co/Jgmy1Xk4Hl EVERY £ COUNTS pic.twitter.com/UdX1olUfxm

You can contribute to Natashja and her team’s project by visiting the following link: http://t.co/yocm1Qi8Z1

Enrique’s injury was worse than it appeared