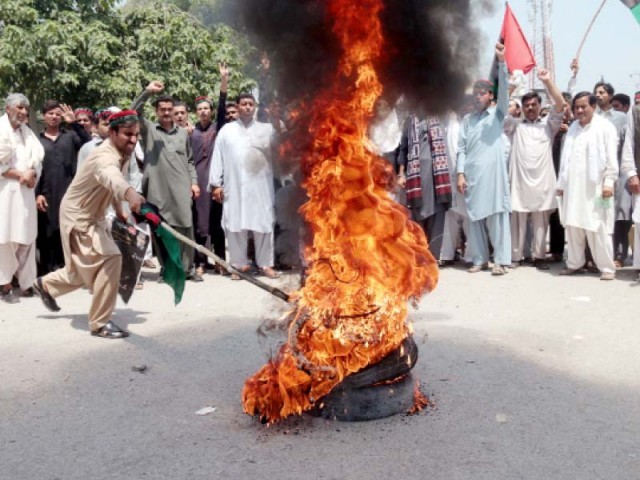 Before heading into local government polls, the coalition government in Khyber-Pakhtunkhwa seemed to be a water-tight unit. However, that no longer appeared to be the case on Tuesday as Jamaat-e-Islami accused Pakistan Tehreek-e-Insaf of using the government machinery to rig the election.

While Awami Jamhoori Ittehad Pakistan chief and senior minister Shahram Tarakai also agreed there was widespread rigging, Tarakai said the government did not influence the result in any way.

Addressing a press conference at the party headquarters, K-P JI chief Professor Mohammad Ibrahim Khan said the PTI government used the administration and police to rig the polls. He added the Election Commission of Pakistan’s (ECP) performance was also not up to par as it failed to train polling staff and presiding officers.

However, Ibrahim said ECP should not announce fresh elections as there was no guarantee future polls would be free of irregularities. The JI leader said any such move would sweep blatant wrongdoings and anomalies under the rug. He suggested the ECP review the situation at each polling station before releasing the final results on June 7. He claimed all other parties apart from JI were involved in irregularities in one form or another.

Ibrahim said, “Proof of rigging presented by the media seemed enough.” However, if it was in any way inconclusive, his party had its own evidence to substantiate the allegations.

“If ECP had announced phase-wise polling, nobody would have rejected the results.” He also said the JI would also challenge the ECP decision of announcing a re-election in PK-95, Lower Dir-II before the court.

Give us the boots

Losing candidates across K-P have demanded re-polling; some are asking the process be held under army supervision.  These include candidates from the ruling Pakistan Tehreek-e-Insaf (PTI) and its ally AJIP.

Senior Minister Shahram Khan Tarakai said the elections were completely rigged and the election commission should take immediate notice. He added his party was present at the sit-in against rigging and would never allow anyone to steal the public’s mandate. Tarakai clarified the provincial government did not influence the poll results in any way. “All seats would have been clinched by the ruling parties had that been the case.”

He produced stolen election commission material including stamps, copies of ballots and inkpads which were reportedly lying in open fields and drains outside polling stations in Peshawar district.

“We want a re-election under the supervision of the armed forces,” Tarakai said.

PTI candidate from Kakshal UC-24, Nawab Khan, claimed the election was fixed, that ANP did not allow voters into polling stations. He also urged a fresh election in the province as matters were “badly mismanaged”.

ANP, PPP, JI and PTI candidates in Malkandher UC-64 accused PML-N MPA Arbab Akbar Hayat of harassing voters. They said he influenced the election staff and kept the polling process going till 11:30pm which was against regulations.

The Peshawar district administration has already announced re-polling in 26 stations.

Addressing a press conference at Arbab House in Peshawar, Asma Alamgir said these elections took place under “the shadow of hooliganism and rigging”. Alamgir said women were treated badly, their ballots snatched and they were thrown out of polling stations. She said the chief minister’s silence on the matter was baffling.

Activists from almost all political parties took to the streets against the alleged rigging in Batkhela city of Malakand on Tuesday. The protesters—defeated candidates from different villages and union councils—blocked GT Road and accused the civil administration and law-enforcement officials of abetting rigging on May 30.