Samant­ha Elauf was denied a sales job in 2008 at an Abercr­ombie Kids store in Tulsa when she was 17
By Reuters
Published: June 1, 2015
Tweet Email 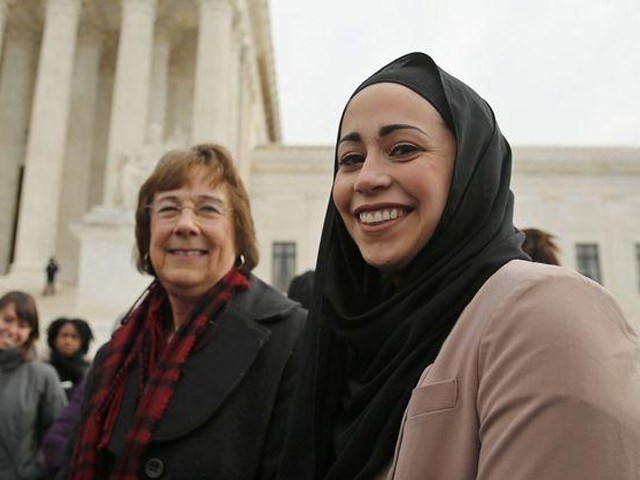 Samantha Elauf (R), who was denied a sales job at an Abercrombie Kids store in Tulsa in 2008, stands with U.S. Equal Employment Opportunity Commission (EEOC) lead attorney Barbara Seely (C) at the US Supreme Court in Washington, February 25, 2015. PHOTO: REUTERS

WASHINGTON: The US Supreme Court on Monday ruled in favor of a Muslim woman who filed a lawsuit after she was denied a job at an Abercrombie & Fitch Co clothing store in Oklahoma because she wore a head scarf for religious reasons.

On a 8-1 vote, the court handed a win to the US Equal Employment Opportunity Commission (EEOC), a federal agency that sued the company on behalf of Samantha Elauf. She was denied a sales job in 2008 at an Abercrombie Kids store in Tulsa when she was 17.

Read: US justices show support for Muslim woman denied job due to hijab

The legal question before the court was whether Elauf was required to ask for a religious accommodation in order for the company to be sued under the 1964 Civil Rights Act, which, among other things, bans employment discrimination based on religious beliefs and practices.

Elauf was wearing a head scarf, or hijab, at the job interview but did not specifically say that, as a Muslim, she wanted the company to give her a religious accommodation.

The company denied Elauf the job on the grounds that wearing the scarf violated its “look policy” for members of the sales staff, a policy intended to promote the brand’s East Coast collegiate image.

Muslim groups said in a friend-of-the-court brief in support of Elauf that employment discrimination against Muslims is widespread in the United States. Often, the act of a woman wearing a head scarf is what triggers the discrimination, according to the brief. The EEOC has reported that Muslims file more employment claims about discrimination and the failure to provide religious accommodations than any other religious group.