Above the law?: PTI minister accused of forcibly taking ballot boxes away

Above the law?: PTI minister accused of forcibly taking ballot boxes away 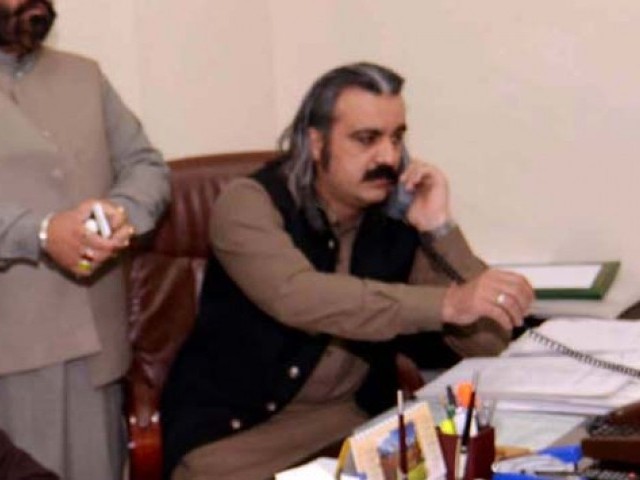 DI KHAN: A minister of the ruling party was roaming scot-free in DI Khan after allegedly forcibly taking away ballot boxes from a polling station on Sunday.

According to the DI Khan police, vote count was under way in Hemath Adda polling station in the morning when PTI lawmaker Ali Amin Gandapur accompanied by his brother Umar Amin Gandapur, a candidate for tehsil nazim, and his armed supporters arrived, picked up the ballot boxes and began putting them in the minister’s car.

Cantt SHO Saifur Rehman who was on duty at the station attempted to stop the minister and his accomplices from entering the station with the help of his police staff, but failed, said a local who witnessed the incident.

Soon after, a large number of workers of opposition parties’ candidates gathered in the area and surrounded Ali’s car. They pelted it with stones and sticks and slashed its tyres. The minister, who was inside the car, remained unhurt.

Officials of the district government, the DPO and DC arrived at the scene subsequently and negotiated with the activists to disperse them; the minister then drove away.

Cantt SHO has registered an FIR in Saddar police station against Ali, his brother Umar and their security guards under various sections of the Pakistan Penal Code, including assaulting a public servant to deter him from his duties.

In the report, SHO Rehman said the MPA used abusive language towards him, manhandled him and gave death threats, said a Saddar police official.

However, Ali has denied the allegations. He told journalists he had received complaints about illegal ballots being cast at the polling station (during counting) in favour of his opposition candidates. He said he learnt the police and polling staff were acting as silent spectators to the activity so he went to the station.

Ali claimed the PML-N was rigging in the tehsil. “They are doing this because they have been defeated,” he said.

Under the directives of DI Khan DPO Sadiq Hussain Baloch, more than a dozen cases have been registered against those resorting to violence at the polling stations.

The presiding officer at Government Girls High School Bihari Colony, Samina Sadiq, filed a case, saying PTI workers Usman, Kamran, Noorullah along with 35 others barged into the polling station and vandalised the premises. She said they resorted to aerial firing, tried to snatch ballot boxes and misbehaved with polling staff.