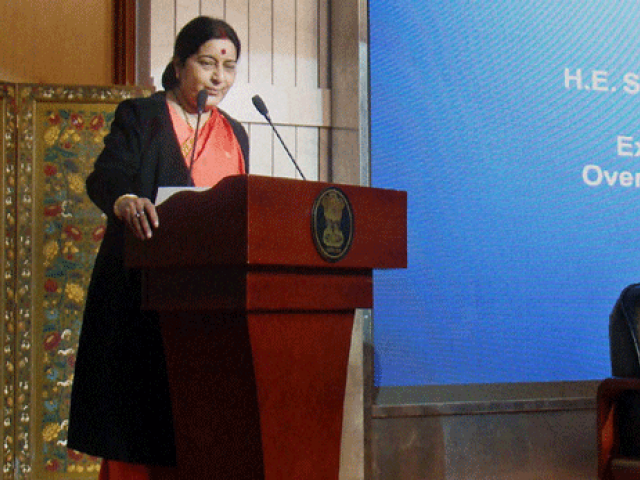 INDIA: India’s external affairs minister Sushma Swaraj said on Sunday dialogue between India and Pakistan will only be held under the condition that Pakistan takes action against terrorists like Lakhvi and others for carrying out terror acts in India.

Swaraj said Pakistan has taken a hostile stance when it comes to relations between the two countries.

India abides by three principles with respect to maintaining its relations with Pakistan, said Swaraj while talking to the media on the event of the first anniversary of the Narendra Modi government. She said all matters are to be resolved through talks, which are to be held in a peaceful environment and without third party intervention.

“As said earlier, our dialogue with Pakistan will only materialise in a peaceful milieu. This zone will be created only when Pakistan takes action against the (terror) perpetrators like Lakhvi and others,” she added.

She added that other than taking up the Jammu and Kashmir issue with an international forum (UN), PM Nawaz Sharif also spoke to the UN Secretary General Ban ki-Moon to mediate the situation.

Last week, Union Home Minister Rajnath Singh said “If Pakistan wants its own welfare… It must stop all its nefarious activities aimed towards India.”

Further, the minister clarified that no decision had been taken on Indo-Pak cricket series. Swaraj’s remarks come agaisnt the backdrop of PCB chairman Shaharyar Khan’s recent visit to India to push for resumption of Indo-Pak cricket ties.

Khan, in a joint press statement with BCCI President Jagmohan Dalmiya in Kolkata, proposed a series comprising three Tests, five ODIs and two T20s in UAE in December this year. The BCCI has, however, not given any categorical statement yet on the proposed series and the venue.