PTI streaks ahead in polls marred by violence

PTI streaks ahead in polls marred by violence 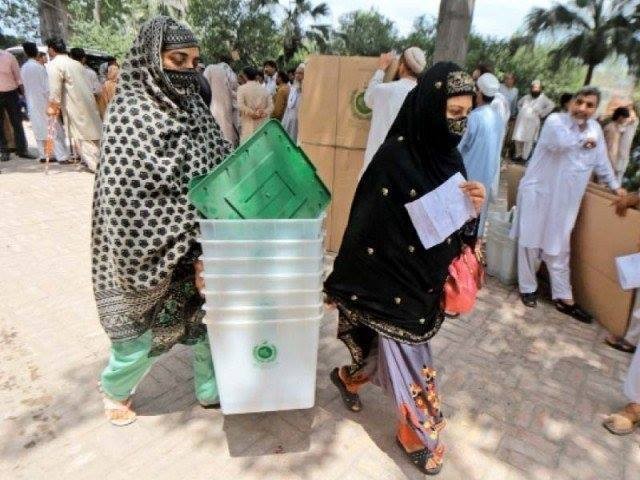 The Pakistan Tehreek-e-Insaf (PTI) streaked ahead of its political rivals in Khyber-Pakhtunkhwa’s local government elections on Saturday against the backdrop of violent clashes, mismanagement and inadequate security measures. Its opponents also raised a red flag over the fairness of the poll, accusing the ruling party in K-P of rigging.

According to unofficial results, the PTI was leading in district and town councils across the province in the polls – which were held after a decade. The Awami National Party (ANP) trailed just behind PTI.

Violence and other murky events of the day contributed to the delay in results. Election officials were hesitant to step out of the polling stations, fearing that they might be attacked and the polling material snatched.

Preliminary results collated from different parts of the province showed that PTI candidates are ahead of their rivals in Haripur on six of the 45 union councils, while six seats have been secured by independent candidates and four by Pakistan Muslim League-Nawaz (PML-N).

Pakistan Peoples Party’s (PPP) district president Zulfiqar Qureshi was ahead of his rival candidates for the tehsil council seat from UC central.

In Abbottabad, out of the total 51 UCs, the results received so far revealed that the PTI and the PML-N both have won two seats, while one was secured by an independent candidate.

Low voter turnout was recorded across Chitral district. Like in other parts of the province, the slow voting process weighed heavily on the minds of voters in Chitral.

However, unlike in other parts of the province, the polling process in Chitral remained peaceful and no untoward incident was reported from across the district.

At least 11 people were killed and around 62 injured – two women and 60 men, including five policemen – across K-P in election-related scuffles and shooting incidents.

Eight people were reported dead in Charsadda alone: a man was gunned down in a brawl in Sherpao, two brothers who belonged to the QWP were gunned down in Tarnab, a man was killed in Tangi, two were killed in firing in Mandani and two bodies were found from a graveyard.
Another person was shot dead in Kohat and two others in DI Khan. Around 58 people were booked by police in Mardan, Charsadda and Swabi for resorting to violence at polling stations while 47 people were arrested in Peshawar.

However, Tariq Zubair, a presiding officer at Payo Kalay, refuted the allegations. According to some candidates, a ballot box had gone missing from a polling station in Maryamzai union council of Koh-e-Daman.

In Peshawar, angry supporters of a political party held three policemen and three polling staffers hostage at a government-run school for girls on Warsak Road over rigging allegations. They were released when a contingent of servicemen was sent to rescue them.

Around 60 supporters of the same party also held police and polling staff hostage at a government primary school for girls in Khazana Bala. A similar incident occurred in Khadra Khel. In all cases, the army and police recovered the ballot boxes from the schools and shifted them to the DC office for counting.

“This is all pre-planned. PTI supporters are doing it to invite army intervention and then the ballot boxes are shifted to the DC office for counting, instead of counting inside the polling stations, because supporters of the ruling party are sure of their defeat,” claimed Faiz Muhammad, a former naib nazim.

K-P Chief Minister Pervaiz Khattak said the provincial government had extended all-out support to the Election Commission of Pakistan, so it was the commission’s responsibility to address the complaints being made about the polls. Khattak certified as fair and transparent the overall election process.