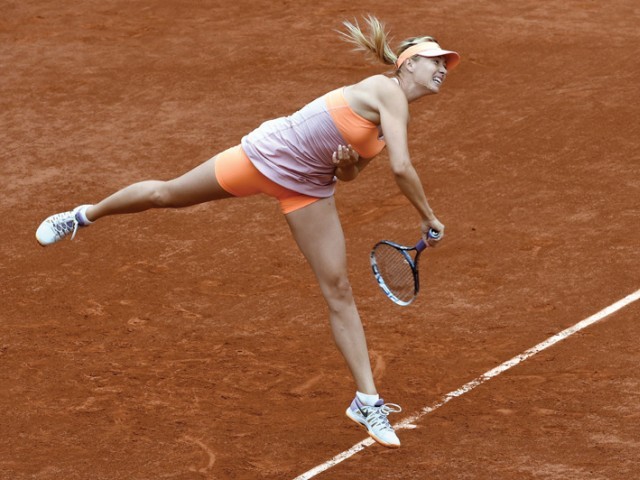 PARIS: Defending champion Maria Sharapova reached the French Open last-16 on Friday although she appeared on the verge of tears at the end of her straight-sets win over Samantha Stosur.

The world number two made the fourth round for the 11th time with a 6-3, 6-4 win over the 26th seeded Australian.

It was the Russian’s 15th win in 17 matches against Stosur who she defeated in a three-set Paris marathon last year.

“I knew it would be a tough match today,” said the 28-year-old Sharapova. “But when I come out on to this court all the great memories come flooding back for me.”

Sharapova, also the champion in 2012 and runner-up in 2013, goes on to face Czech 13th seed Lucie Safarova for a place in the quarter-finals.

Safarova made the fourth round for the third time by beating big-serving German Sabine Lisicki 6-3, 7-6 (7/2).

The Serbian seventh seed, the 2008 winner in Paris, triumphed over 18-year-old Croatian opponent Donna Vekic 6-0, 6-3 and swept into a fourth-round clash against ninth-seeded Russian Ekaterina Makarova.

“After my first two matches, I have really started to get a little bit of feeling and groove,” said the Serb.

Swiss pair Roger Federer and Stan Wawrinka both eased into the last-16 of the French Open on Friday as hopes of a first home winner in 32 years were boosted.

Second-seeded Federer, whose sole title win in Paris came in 2009, reached the fourth round for the 11th straight year with a straightforward 6-4, 6-3, 6-2 win over Bosnian Damir Dzumhur.