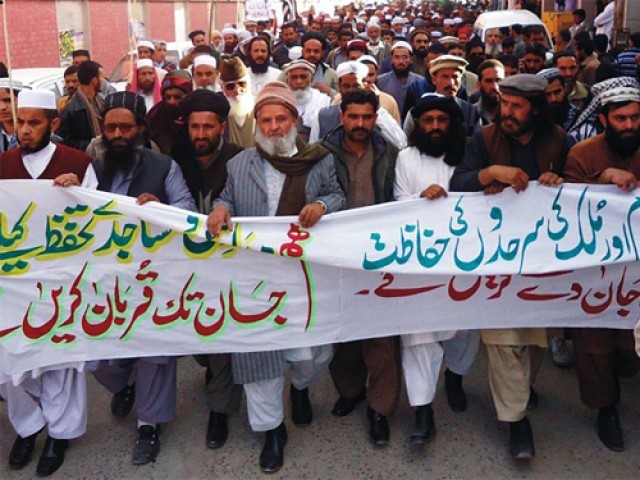 Meetings have begun; agendas are being set and future courses of action regarding alliances and disassociation with others are being discussed at all forums. ONLINE

With the province’s local bodies’ polls due in September, religio-political parties in Rawalpindi, sectarian outfits among them, are weighing their options to ensure they get a slice of the local government pie.

Besides garnering votes from those belonging to their specific schools of thought, the parties are trying to convince the general public through election agendas that claim of improvement in provision of health, education and sanitation services once their candidates are in office.

Meetings have begun; agendas are being set and future courses of action regarding alliances and disassociation with others are being discussed at all forums.

To make their existence felt, all the non-mainstream parties, including Sunni Tehreek (ST), Ahle-Sunnat-Wal-Jamaat (ASWJ) and Majlis-e-Wahdatul Muslimeen (MWM), are trying to reach alliance with major political parties like the Pakistan Tehreek-e-Insaf (PTI), Pakistan Peoples Party (PPP) and Pakistan Muslim League-Nawaz (PML-N). The smaller parties are vying for their ‘elder cousins’ to award tickets to their representatives in specific localities.

Oneeb Farooqui, the local spokesperson for ASWJ, said they are actively participating in local government elections in Khyber-Pakhtunkhwa and would do the same in Punjab.

“We have a clear agenda which is a drastic improvement of delivery services at the local level,” he said.

The party has also reached an alliance with Pakistan Rah-e-Haq party and would contest elections in the name of ‘Awam Dost Group.’

After defeat in local government elections at the cantonment boards, ST has also expedited preparations for the upcoming elections.

A meeting has been planned on June 1 at Bhara Kahu after which the party would officially launch its election campaign. Rallies would be arranged, corner meetings held and gatherings organised in Rawalpindi and Islamabad.

Sources in the party told The Express Tribune that talks were under way with PPP, PML-N and PTI to reach an alliance.

“This is politics…. a game of give and take. We can form an alliance with any party on the same principle,” said Zahid Habib Qadri, a provincial leader of the party. Regarding the election agenda, Qadri said his party would work for improvement of health, education and sanitation services at the local level apart from struggling for devolving power to the grassroots.

Similarly, on Tuesday, MWM arranged a meeting in which it prepared a list of candidates who the party deems should be given tickets.

The party also discussed getting in touch with the PML-N and PTI in localities where there can be a mutually beneficial arrangement.

Talking to The Express Tribune, Asghar Askari, a provincial leader of MWM, said our agenda would be to award tickets to ‘the most sincere candidates’. “Those who could serve the masses, work for local development would be preferred,” said Askari.

Commenting on alliances, ASWJ’s Farooqui said “We can make alliance with anyone except our sectarian opponents.”

Keeping in view the current law and order situation in the country and the rise in sectarian attacks especially in the twin cities,

MWM’s Askari urged unity and demanded the government provide foolproof security at rallies and gathering of all parties.

“We all stand united against terrorism. We are humans first and Muslims by faith and there is no difference between us,” said Askari.

The threats are intensified these days, commented a Rawalpindi resident.

“The district administration should work out a proper security plan to ensure peaceful elections,” he said.

Money for nothing: Clique in PHA finds novel way to mint millions