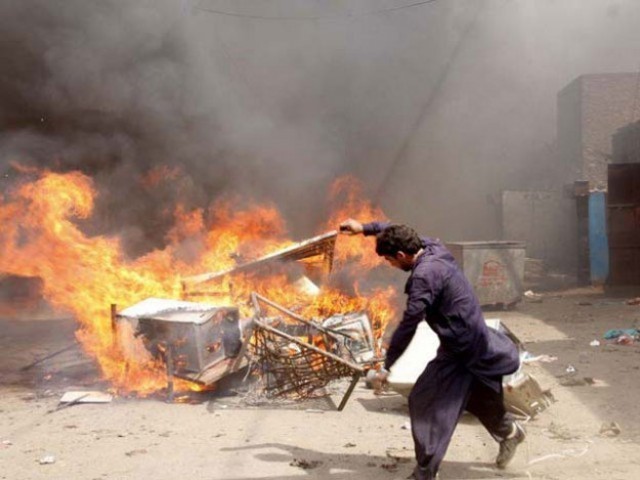 A file photo of a mob.

LAHORE: Christians living in the Sanda neighbourhood of Lahore fled for their lives as a charged mob attacked their houses after accusing one of their members of defiling the Holy Quran.

The incident took place late Sunday night in the Dhoob Sari area, where hundreds of emotionally charged people from different adjoining areas had converged. The crowd, carrying clubs and ammunition, chanted slogans and hurled abuses at the Christians.

The attackers forced their entry into houses and misbehaved with women as their men had already fled, fearing home invasion.

As police attempted to disperse the attackers, the latter threw rocks at the former, injuring DIG Operations Dr Haider Ashraf and some other cops. Rangers were then called in who regained control of the situation. They stayed on till the wee hours of Monday. Khalid Shehzad, a member of the Christian community, told The Express Tribune that accused Humayun alias Faisal is mentally unstable who does not understand the sensitivity of the matter. He said he has medical certificates to prove mental illness.

On the complaint of Sayed Zeeshanul Haq, police registered an FIR against Humayun under section 295-B of Pakistan Penal Code and arrested him.

The complainant, Haq, told The Express Tribune that they spotted Humayun burning pages of the Holy Quran after taking them from a box attached to a street-poll for placing torn pages of the holy book.

In March 2014, a frenzied crowd set 200 houses ablaze in a Christian locality over alleged blasphemous remarks by a resident of the area.

The police have not yet said whether arrests would be made in this regard.