Japanese music maestro: ‘Traditional to jazz is a natural transformation’

Japanese music maestro: ‘Traditional to jazz is a natural transformation’

Kaneko has been recogn­ised as a pionee­r due to her unique­ly chroma­tic use of instru­ments.
By Hafsah Sarfraz
Published: May 23, 2015
Tweet Email 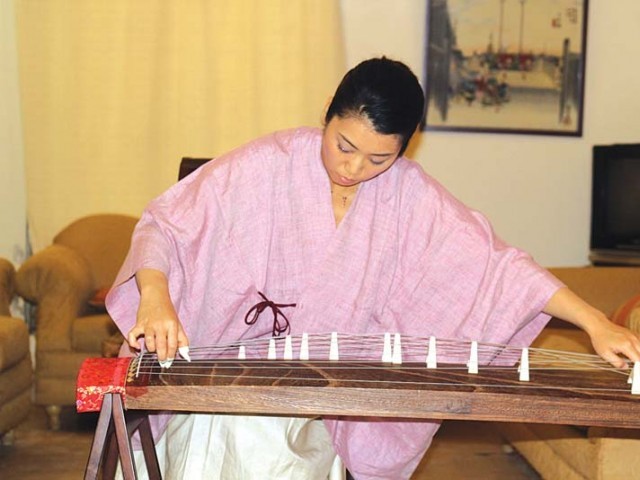 Kaneko fuses her Japanese roots with jazz music to come up with some remarkable melodies. PHOTO: EXPRESS

ISLAMABAD: The capital has a special guest over this weekend.  Japanese Koto and Shamisen player and jazz singer and songwriter Sumie Kaneko has come all the way from New York to perform in Islamabad, Karachi and later in Bangladesh.

Kaneko has been recognised as a pioneer due to her uniquely chromatic use of instruments. Her project J-Trad & More that is fusing her Japanese roots with the colours of jazz and freedoms of avant-garde is well-received over the world.

“Everyone asks me that traditional and jazz is a very unique combination but for me it’s a natural transformation. My mother is a musician, I have grown up listening traditional music but I personally enjoy jazz,” she said.

When asked if Japanese instruments lend themselves to jazz since it is improvisation, Kaneko said she had a tough time in the beginning. “Japanese music is very traditional with particular patterns that you have to stick to. During my first semester at Berklee College of Music, I needed to improvise and found it very hard,” she recalled. “Eventually I got used to it and started writing music too,” she added.

She grew up in an environment that instilled passion for music in her. “I think my inspiration is my mother. She wouldn’t ask me if I had done my homework but she would always question if I had played the instruments and practiced,” said Kaneko.

Her normal day entails rehearsing in morning, either in Brooklyn or other parts of New York and also particularly goes to performances of her musician friends. “I believe witnessing others perform is an inspiration to strive and continuously improve. It also helps me cater to my diverse audience because I perform at clubs, kindergarten schools, and colleges like Harvard,” she said.

“New York is really diverse and people there are always appreciative of new stuff as compared to Japan where they have specific mindsets, which sometimes bother me but on the other hand helps me learn more about my roots,” she added.

Her album is due this summer, and she will be touring Japan, where she performs often.

Speaking about her inspirations and musical influences, Kaneko said besides her mother Japanese religion and traditions also inspire her.

When asked about her experience of visiting Pakistan, she said it has been great so far. “I haven’t had the time to see much because of rehearsals but I hope to see Taxila while I’m in Islamabad and I will also be heading Karachi for a performance. I loved the food here; it’s absolutely delicious and I can’t have enough of it,” said Kaneko.