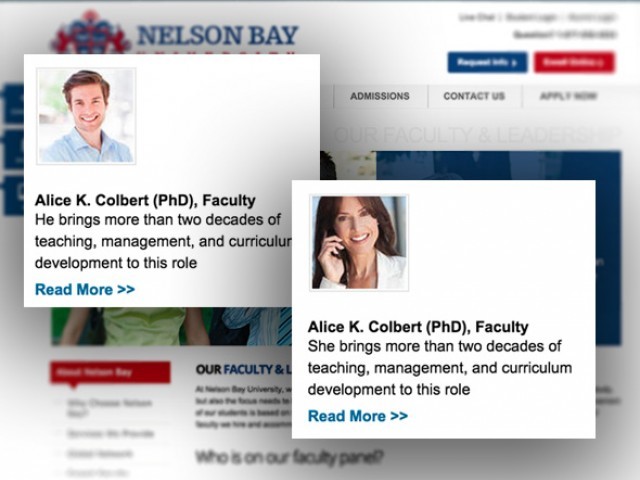 The evidence against Axact just keeps piling up after a New York Times report revealed the Pakistani company was operating as the ‘world’s largest diploma mill’.

After the NYT report highlighted how most of the people who featured on university websites belonging to Axact were paid actors, Slate did a little research of their own and found that most of the faculty and students in the fake degree programmes were models used in stock photos.

The online magazine reviewed several of the high school diploma programmes and online universities listed in the NYT report only to find out that the faculty and students do not exist beyond pictures.

Here are profiles of some of the faculty members:

George S Kirkland portrayed as a permanent faculty member of the School of Business and Management moonlights in the world of stock-photo modeling, where his alias is “middle-aged businessman in suit.”

But Kirkland is not just a teacher, he’s also an active member of Johnsonton Community Parish Church.

Fleck has also featured on a website Glamoz as an 82-year-old French woman who has never had any plastic surgery. But it just doesn’t stop there. Dr Tiara Dane, an associate professor of computer studies at Greenlake University is a woman of many talents and nationalities.

The “pretty businesswoman” as listed in stock photos is also a recruiter for the health care management company Global Medics in Ireland. Further, Gracy Allen, an MBA student at Greenlake University student is just not a student there but is also pursuing a Master of Arts in communication at Spring Arbor University as can be seen below. At Nelson Bay University, a student is not shared between two universities like in Greenlake and Spring Arbor but two professors share the same name – Alice K Colbert.

The first Alice K Colbert is a “confident young man” who goes by the alias Lance Redgrave, a “CEO/Founder” who is a client of dozens of online businesses, ranging from Web design firms to sporting goods stores. Meanwhile, the other Alice K Colbert is known to her friends as “beautiful happy brunette woman or businesswoman in her thirties talking on her cell phone.”

She “brings more than two decades of teaching, management, and curriculum development” to her role at Nelson Bay University, which is impressive given her age. Even more impressive is that she moonlights as a representative of Clienttell, “a leading provider of automated patient appointment reminders in the healthcare service industry.” Looking to find out more about the faculty and students with their varied and jampacked résumés, Slate tried chatting online with representatives of several Axact schools but only got the message “Please wait for a site operator to respond” for several hours. They also tried calling two Axact schools —Ford Worth High School and Headway University —but no one picked up.

This article originally appeared on Slate.

Bin Laden was bent on spectacular US attack until the end: files