Says those involv­ed in the scam should be tried for treaso­n
By Our Correspondent
Published: May 20, 2015
Tweet Email 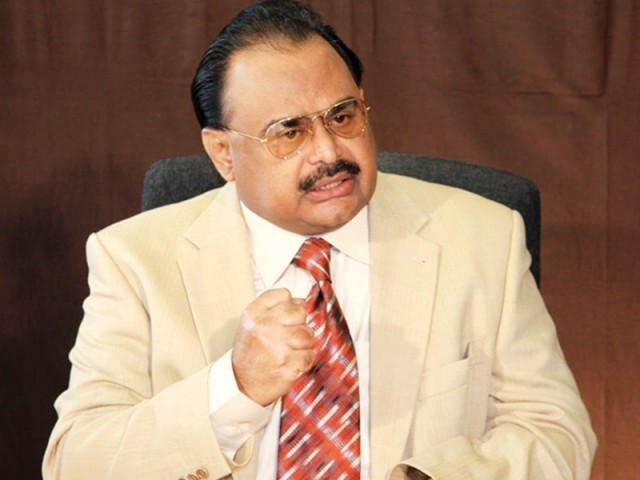 Says those involved in the scam should be tried for treason. PHOTO: APP

Muttahida Qaumi Movement (MQM) chief Altaf Hussain demanded that the names of Axact’s top officials including the CEO be placed on the Exit Control List (ECL), and that they be tried under Article 6 of the constitution for treason.

“If the allegations and revelations by The New York Times about Axact are true, then the passports of all the executives of the company should be confiscated and they should be placed on the ECL,” said Altaf in a press statement.

He demanded the prime minister and federal government take immediate notice and conduct an inquiry into the allegations of the software company selling fake degrees and earning millions. “Those involved should be tried for treason and convicted under Article 6. Traitors of the country should be given exemplary punishment so that no one dares to be involved in such unpatriotic acts.”

The MQM chief said that the Axact company had damaged the country’s integrity and committed treason, adding that the intelligence agencies were in the dark about this fraud committed by the company.

Meanwhile, Federal Information Minister Senator Pervaiz Rashid said that there was a dire need of making effective legislation to curb cybercrimes in the country.

Talking to a news channel, he said the information technology was a new sector at the national business arena and there was still room to improve the check and balance system.

Commenting on The New York Times report about the fake degrees business of Axact, the minister said it was because of the shortcomings in the existing laws dealing with cybercrimes.

He said there was no proper awareness about ‘e-business’ in Pakistan, even the educated community had little information about it. “Unfortunately, there is no law to deal with cybercrimes effectively,” he added.  Accordingly, Pervaiz Rashid said, a bill had been moved in parliament to prevent cybercrimes but it was lingering on due to difference of opinion among the political parties.

“The law will be enforced as soon as the bill gets the nod from the quarters concerned after which the elements involved in cybercrimes will be arrested,” he added.

Replying to a question, the minister said the government and law enforcement agencies were bound to take action when a crime surfaced.