Bodla inducted in US Martial Arts Hall of Fame

Bodla inducted in US Martial Arts Hall of Fame 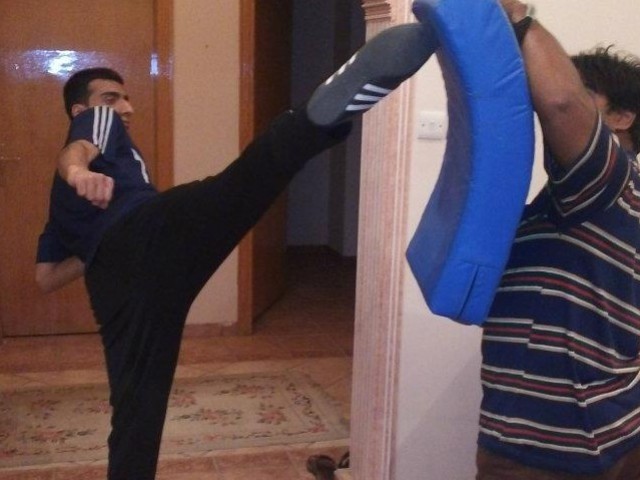 became the first Pakistani to break the record of most kicks in three minutes (616) which he improved again (783) in 2013. PHOTO: Facebook.com/Ahmad-Amin-Bodla-martial-artist

KARACHI: Ahmad Amin Bodla became the first Pakistani to be inducted in the US Martial Arts Hall of Fame, courtesy of his 32 world records, including five recognised by the Guinness Book of World Records and one by Germany’s Book of Alternative records.

The 22-year-old has been creating world records of most kicks, knee-strikes, and punches since 2012, and within a year, he became the first Pakistani to break the record of most kicks in three minutes (616) which he improved again (783) in 2013.

Bodla’s tireless endeavours to make a mark for his country gave him his biggest accolade: recognition by the US authorities.

While it is like a dream come true for Amin, the Lahore-based martial artist said has more to offer. “It’s amazing to be named with the top martial artists,” Bodla told The Express Tribune. “I was nominated for the Hall of Fame last year, but I couldn’t correspond with the association on time, so this year I wrote that letter of acceptance, and now I’m officially a part of the US Hall of Fame.”

Bodla, however, admits that it does hurt him sometimes that his achievement is overlooked at home. “Even my university has no interest in supporting me,” he said. “When I tell them that I’ve achieved something, they think that I’m faking it.”

Bodla has been diagnosed with loss of cartilage in his knee, an early symptom of the onset of arthritis.

The diagnosis was made after he broke the record for most kicks and most knee strikes last year.

But the youngster remains defiant. “The doctors have told me to carry on with my training and build more muscle,” he stated. “I have to train and keep myself active to avoid more loss, because quitting the training now will worsen the situation.”