Two points above United in third place, Arsena­l are on course for automa­tic Champi­ons League qualif­icatio­n
By AFP
Published: May 16, 2015
Tweet Email 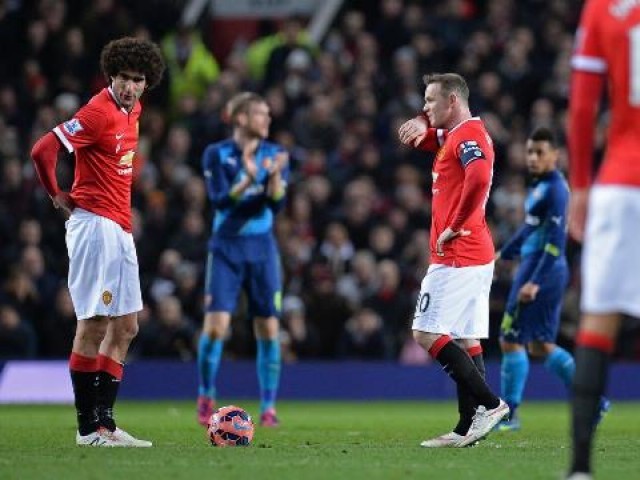 A file photo of a match between Manchester United and Arsenal. PHOTO: AFP

LONDON: Manchester United and Arsenal’s players will be hoping to avoid the encumbrance of a Champions League play-off tie when they meet at Old Trafford in the Premier League on Sunday.

Two points above United in third place (and three points below second-place Manchester City), Arsenal are on course for automatic Champions League qualification, with the team finishing fourth obliged to enter the competition in the play-off round in late August.

But victory for United would take them above Arsenal and although Arsene Wenger’s side have a game in hand at home to struggling Sunderland on Wednesday, defeat is a complication they could do without.

Furthermore, with the north London club having lost 1-0 at home to a Swansea City side with nothing to play for on their last outing – ending a 10-game unbeaten run – Sunderland’s visit no longer seems the formality it perhaps once did.

United are effectively guaranteed to finish no lower than fourth, having opened up a six-point gap over fifth-place Liverpool with a significantly better goal difference.

Manager Louis van Gaal has therefore achieved his minimum objective for the campaign, but he also knows that snatching a podium place from Arsenal’s grasp would give his team a psychological edge going into next season.

“I think it (finishing fourth) was a big challenge,” said the Dutchman, whose side halted a run of three straight defeats with a hard-fought 2-1 win at Crystal Palace last weekend.

“So, I think we did very good, but it is not good enough because at the end, we want to be champions.

“Now, at the end, we want to be third because that is still possible. We can put pressure on Arsenal and that is what we want to do on Sunday.”

The two sides have claimed a 2-1 away victory apiece in their encounters to date this season, with United winning at the Emirates Stadium in the league in November and Arsenal prevailing in the FA Cup in March.

It is nine years since Arsenal last tasted success at Old Trafford in the league — a run of seven matches, which included an 8-2 humbling in August 2011 in which Wayne Rooney plundered a hat-trick.

But the FA Cup quarter-final success will give Arsenal confidence about returning to a stadium where they have struggled in recent years.

“It was a very important win there,” said Wenger, whose side will defend the FA Cup in the final against Aston Villa on May 30.

“It was a very positive factor for the development of the team to go there and win. We knew that if we went through, we could get to the final and have a chance to win the FA Cup.

“That was very positive because we knew it was a tricky draw. We can be inspired by that because a repeat of that kind of performance could give us some very important points.”

United old boy Danny Welbeck returned to haunt Old Trafford by claiming the winner in March – capitalising on an error from Antonio Valencia to score – but he will miss Sunday’s game with a knee injury.

Wenger has named an unchanged team in his last five matches, for the first time in his 19-year tenure, but with Jack Wilshere, Theo Walcott and Kieran Gibbs all fully fit again, he may opt to rotate.

Welbeck’s former strike partner Rooney, who has a dead leg, is one of several players set to miss out for United, along with key midfielder Michael Carrick (calf) and left-back Luke Shaw (head).

But defender Marcos Rojo, striker Robin van Persie and record signing Angel di Maria are all in contention following spells on the sidelines.

Goal-shy striker Radamel Falcao will hope to feature on what will be the last home appearance of his disappointing loan spell from Monaco.